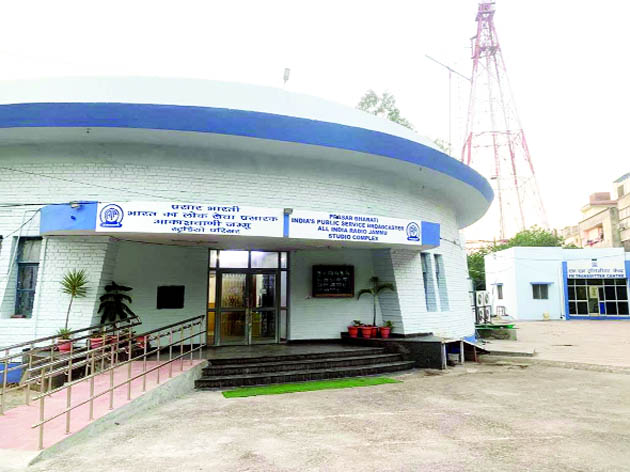 O P Sharma
The Dogri Regional News Unit (RNU) of AIR Station, Jammu has come of age and celebrating its 51st Foundation Day today (December 6). This Dogri News unit was set up on December 6, 1971 during the troubled time of Indo-Pak conflict to project factual position and counter false propaganda from across the border.. The RNU has gained immense popularity among the people not only in the sensitive Jammu and Kashmir but also even across the borders in Pak occupied Jammu and Kashmir (PoJK) and Pakistan, influencing general public opinion.

It is one of 50 RNUs of All India Radio network in various regional languages across the country. It may be mentioned that presently eight news- bulletins in Dogri and two in Gojri are put out at optimal timings in the morning, afternoon and evening every day with maximum listenership.
The staff celebrated the Foundation Day of RNU and highlighted the proud modernization and success story of Dogri and Gojri news bulletins broadcasts from first Radio Station at Jammu and recalled its unique importance and national service as well as contribution.
“To start with, in 1971, the news bulletins: twice-a-day in Dogri language were aimed to inform and educate the general masses about the true facts and clear the environment of rumours, infuse confidence and also counter poisonous propaganda from across our borders.
The first bulletin in Dogri went on air on December 9, 1971 while the Gojri bulletin was also introduced during 1980 and steadily now growing in popularity among largest segment of our population with the passing time.
An eminent writer, Thakur Poonchi was the founding editor of Dogri News Unit, who worked single-handedly and put in his best efforts. It may be recalled that noted editors of Regional News Unit of Jammu included among others: D R Kiran, Kashmiri , Ajit Singh, A K Handoo, Mohd Yussuf Ganai, M.K. Wangoo, Balwant Singh, Vijay Saqi, Sanjit Khajuria, Neha Jalali and presently headed by R. K Raina . The News-casters connected with RNU, Jammu are : Lajya Manhas, Narendra Bhasin, Joginderpal Chhatarpal, , Dr. Veena Gupta, Vijay Sharma, Chanchal Bhasin, Sudershan Prashar, Parveen Kesar, Kuldeep Singh Jandriya, Nirmal Vinod, Jagmohan Sharma, Vijay Bajaj , Shruti Khajuria, Naresh Kumar Sharma and others.
Fair Reporting
Over the years, these bulletins created wide-spread awakening and are always appreciated by general public. The basic objective of these news-casts has been to give out all factual picture and gain public trust. In the past the work in the Dogri news section was manual with very limited staff members and few infrastructural facilities for efficient working with accuracy, speed and suitable space but now computers and digital equipment are deployed. Now modern equipments are used for speed and on spot reporting.
But it is noteworthy that the Dogri bulletins are listened with due attention and also discussed and debated.”It is worthwhile to mention that the news broadcasts by the RNU of AIR, Jammu are rated authentic and has gained popularity, credibility among the common masses. The modernization of reporting has taken place with introduction of professionals and adoption of modern technology and equipments.
Marching Forward
In an exclusive interview, present overall in charge of Dogri, RNU, R K Raina told me ” while Dogri news bulletins has gone now up to eight daily and two in Gojri, one community center also on-the spot reporting,sound bites and instant reporting of some important functions and few events. While bulletins have gone up, listenership shot high with rising credibility”. The RNU of AIR, Jammu is regularly broadcasting PM Modi’s “Mann Ki Baat” and also important feature programs in Dogri language “Azadi Ka Mahotsav” with highest listenership and appreciation.
“It needs to be mentioned that it was Maharaja Hari Singh who inaugurated on December 1, 1947 the Radio Station, Jammu to enlist active public participation in development process and also to effectively counter the Pakistan’s virulent anti-India propaganda .It then operated from three classrooms of the Government Ranbir Higher School, Parade, Jammu with address at 6.30 pm by Maharaja Hari Singh. well-known Urdu writer Rajinder Singh Bedi was its officer-in charge from January 3, 1948. This Radio Station has played a crucial role in the dissemination of news , views, educational and entertainment programes as also promotion and preservation of Dogri and other local languages as also our distinct rich Dogra cultural heritage.”In the recent years, there has been a great leap forward in the RNU with modernization and up-gradation of news gathering, editing in the News Room, high speed, transmission, with latest presentation and broadcasting technique by qualified and trained-specialised personal at district and other levels with great impact. It is a fact that radio broadcasting is very effective and efficient medium of communication. It is noteworthy that the Prime Minister Narendra Modi rightly choose the Radio medium for his choicest “Mann Ke Baat” message nation-wide and now through all channels in various languages for much wider listenership.
AIR,Jammu is playing a pivotal role in the presentation of objective, true, accurate and authentic news and views to the general public as a part of Prasar Bharati, a national public broadcasting service and upholding the standards of journalism. It is expected that the Regional Dogri News Unit AIR of Jammu will grow steadily in status and strength winning the full confidence of the people in Jammu and Kashmir as also across the entire country.
I urge that the present head of AIR, Jammu, DDR, Er Ravi Kant Babu and also RK Raina of RNU must make redoubled endeavours to re-introduce commentary in Dogri (Samiskha) on current affairs, further upgrade, digitalise and modernise professionally this premier and crucial broadcasting AIR Station Jammu as one of the best in the country.
(starline.syndicate.service@gmail.com)