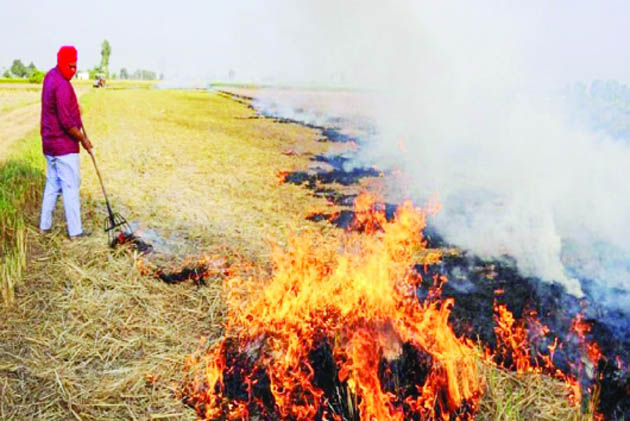 Dr Ashwani Mahajan
Although the air of Delhi and neighboring areas of Haryana and Punjab continues to remain toxic due to stubble burning by the farmers of Punjab and Haryana, there is a good news that this time stubble burning has come down by 26 percent in Haryana, whereas in Punjab, it continues unabated. The pictures taken by the satelites and the scientific information collected, otherwise, are all pointing to the fact that Haryana is inching towards solution of stubble burning.
In the month of November 2019, the Supreme Court had lambasted the Government of Haryana, Punjab and Uttar Pradesh, as to why they were not taking adequate measures to stop stubble burning. The court had also asked these state governments to give an incentive of Rs 100 per quintal of crop to encourage farmers, not to burn stubble.
How much the Supreme Court’s advice was heeded to, can be a matter of enquiry, but it is certain that this year, according to the American Space Agency ‘NASA’, between October 23 and October 30, incidents of stubble burning in the state of Haryana were much less as compared to Punjab. According to the data of the Indian Council of Agricultural Research (ICAR), between October 1 and November 3, there were 29,780 incidents of stubble burning in Punjab, while this number was only 4,414 in Haryana. The Environment Pollution (Prevention and Control) Authority has also informed the Supreme Court that while Haryana has largely controlled stubble burning incidents, Punjab’s situation in this regard is very poor.
The news of control of stubble burning by Haryana is a big relief, but the important question is that how Haryana has been able to solve this problem and why Punjab has failed? In this regard we need to learn about the steps taken by Haryana to curb stubble burning, which Punjab should also follow.
Efforts on technology front
The Haryana government, this year distributed machines named ‘Super sms’, ‘Rotavator’, ‘Happy Seeder’ and ‘Zero Till Seed Drill’ in large numbers, so that farmers avoid the practice of stubble burning. The farmers who used these machines last year benefitted significantly from this and their yields also increased. Due to this experience, now more farmers have started using these machines, although some farmers believe that they are not able to use these machines due to the high rent (Rs 2000 per acre).
But it is true that Government efforts towards educating farmers about these machines and increasing awareness among farmers about alternative uses of stubble, has started bearing fruits.
Cash incentives
The Haryana Government has already been giving an incentive of Rs 1000 per hectare to the farmers for collecting the stubble after harvesting and baling, now the amount of Rs 1000 per hectare has been started from this year for in-situ stubble management on the farm itself. The State Government is also giving Rs 10 lakh as incentive to the panchayats of red zone, for burning stubble. Every year the budget of different types of incentives is also increasing.
Penal provision
Not only incentive, but also the provision of punishment, has been seen in the state of Haryana. Till the last week of October this year, 1041 challans were issued against stubble burning, in which a fine of Rs 26 lakh was slapped. Due to all kinds of provisions of incentives, technology, experiments and penal action, a situation has been created that where in 2021 till October 26 there were 2010 cases of stubble burning, this year till that time only 1495 cases were registered (a decline of 26 percent).
It is true that the policy of ‘stick and carrot’ of the Haryana Government seems to be successful now, but the solution to the problem of stubble in Haryana was not so effective previously. If we look at the figures, it is known that before 2021, there was a continuous increase in these incidents in Haryana. But only after 2021, there is a decline in these incidents. This may mean that the Haryana government is now taking this problem seriously. But on the other hand, the Punjab Government, which was earlier doing a better job than Haryana regarding the problem of stubble burning, is now lagging behind in this battle. Significantly, according to the press release issued by the Central Government on 7 April 2022, 82533 cases of stubble burning were registered in 2021 in Punjab, Haryana, and Uttar Pradesh, which was 7.7 percent less than in 2020. The best performance in this was from Punjab, where only 71304 cases were reported in 2021 as compared to 83002 cases in 2020. According to the NASA’s satellite images, stubble burning was seen in 354 thousand hectares in Haryana in 2021 as compared to 216 hectares in 2020. During the same period, stubble was burnt in 15.9 lakh hectare as compared to 16.6 lakh hectare in Punjab.
Solution is possible
While Haryana is moving towards solution of the menace of stubble burning, the Punjab government has not only been failing, it seems to be in the denial mode too, citing the helplessness of the farmers. But the example of Haryana is indicating that the problem of stubble burning is not insurmountable. All that is needed is a strong political will. The people of India have always been adept at finding opportunity out of crisis. Farmers of Haryana are experiencing increase in production amidst reduction in incidents of stubble burning through better management. With the increase in production by the use of suitable machines, the income of the farmers is also increasing. Earlier it was thought by the farmers that there is no solution except burning the stubble, as its management is expensive, but now they are realizing that by managing the stubble in the field, their cost of fertilizers, pesticides and weedicides can be reduced. Sugar and ethanol can also be produced from the stubble. According to a study conducted by the Punjab Government, Government’s cooperation for stubble management can be beneficial for the farmers and the society both. This calls for support of the farmers and their training.
(The author is Professor, Department of Economics, University of Delhi)