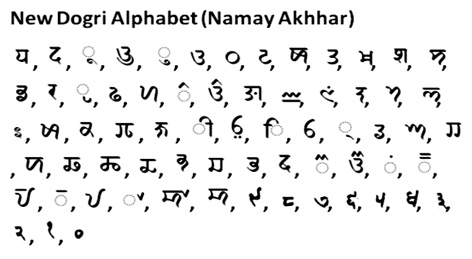 Shikha Magotra, Dr. Ajay Kaul
Script is one of the greatest inventions of mankind. It is the sole medium for transferring cultural heritage from one generation to another. And once it gets obsolete, all the knowledge in the form of writings, scriptures is lost. Gap widens among generations as knowledge does not transfer. Finally, the bridge breaks and there is no way left to connect to the other side.
Same is happening with our culture too. People are drifting away from their mother tongue Dogri and its script too- Namay Akhhar. The script Namay Akhhar was used for writing Dogri language in pre-independent time. It was the official script of the J&K state at that time, along with Urdu. Namay Akhhar belongs to the Takri class, descending from the Sharada family of scripts. Takri is a class of 13 scripts used for writing languages spoken in whole North-west India (J&K, Himachal Pradesh, Uttarakhand).
The form of Takri used for writing Dogri in Jammu has two generations:
* Before 1857- This represents the period before the rule of Maharaja Ranbir Singh in J&K. The script was called Ganmat that time. It was imperfect as matras or, vowel combinations was absent; and ambiguous too as single alphabet was used to represent more number of phenomes like same symbol was used to represent ja and ya.
* After 1857- This represents the golden era of Dogri in J&K during the rule of Maharaja Ranbir Singh’s rule. Ganmat was reformed during this period by Jyotshi Bishweshwar, Principal of Ranbir Pathshala of that time. He removed the script’s ambiguity and introduced matras into it. So, the Ganmat was reframed and renamed as Namay Akhhar or, Dvigrit Akhhar by Maharaja.
Since then, Namay Akhhar served as official script of the state till after India’s independence when the state adopted Devnagari for writing Dogri. That time, knowledge of Namay Akhhar was compulsory. No official not having knowledge of the script could be recruited. Maharaja himself signed in Namay Akhhar on local official papers.
A small initiative has been taken by the Aksharaya Organization of Mumbai for the revival of the script used for writing Dogri language. Regarding this, they have developed a script converter tool- Aksharamukha, available online. Using this tool, we can type in Devnagari text to it and it will convert the text into Namay Akhhar script. You have to select “Dogra” in the Output field while using the tool. The link for the tool is given below-
http://aksharamukha.appspot.com/converter
It will help our youth to understand our mother script characters and relearn it too.
Besides, the Font for writing in Namay Akhhar script on computer has also been developed and available for all dogri lovers. The google font for Namay Akhhar is available as- NotoSerifDogra-Regular.ttf font name. All dogri lovers can visualize the text written in Namay Akhhar script now, after installing the font on your computer. The dogri writers of Jammu can make use of these tools for academic and documentation of novels, poetry in the script now.