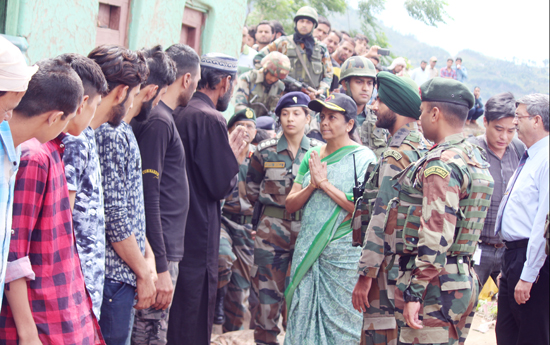 Excelsior Correspondent
JAMMU, June 20: Defence Minister Nirmala Sitharaman today visited the family of the soldier who was abducted and killed by terrorists two days ahead of Eid last week and described him as an inspiration to the nation, as she reviewed security situation in Jammu and Kashmir.
Accompanied by senior Army officers and Poonch District Development Commissioner Mohammad Aijaz Asad, Sitharaman braved rain and walked half-a- kilometre from the last motorable road to reach the remote hamlet of Salani in the border district to express her condolences to the family of slain soldier Aurangzeb, officials said.
“I have come here to meet the martyr’s family,” the Defence Minister told reporters after meeting the family, including Aurangzeb’s father, himself a former Army man who reiterated his resolve to sacrifice his all to safeguard the integrity and sovereignty of the country.
“Here is a family, here is a martyr, who to me and I am sure to the whole nation, stands out as an inspiration. And that is the message I am carrying from here,” she added. Aurangzeb, who was posted with the 44 Rashtriya Rifles, was on his way to home to celebrate Eid when terrorists abducted him from South Kashmir on June 14 and killed him the same day.
He had boarded a private vehicle for Shopian, from where he was supposed to go to Rajouri district. The terrorists intercepted the vehicle as it approached Kalampora and abducted the jawan.
His bullet-riddled body was found at Gussu village, about 10 km from Kalampora, in Pulwama district. Sitharaman handed over a welfare cheque of Rs 5 lakhs to the bereaved family.

Click here to Watch Video
“During her interaction with the family of the brave heart, she reiterated the heroism of the valiant soldier, which will continue to motivate the young generation for times to come,” sources said.
They said Sitharaman visited forward areas and was briefed by General Officer Commanding of Ace of Spades Division on the prevailing security situation and steps being undertaken to maintain vigil on the Line of Control and maintain peace in the hinterland.
The Defence Minister, during her visit to forward areas, also interacted with the soldiers and complimented them for their exemplary devotion towards maintaining sanctity of the Line of Control and giving befitting response to inimical forces, sources said.
They said Sitharaman assured all possible assistance to the family of martyred Rifleman Aurangzeb. The Minister’s visit to the bereaved family came two days after Army chief Gen Bipin Rawat spent over 30 minutes with his parents.
Earlier, Aurangzeb’s family had made an emotional appeal to Prime Minister Narendra Modi, the Army and the Jammu and Kashmir Government to eliminate militancy from the State and avenge his death.
“My son has laid down his life for the country. He was a brave soldier. I and my sons will also sacrifice (ourselves) for the nation. We want goons to be wiped out,” Mohammad Hanief, Aurangzeb’s father and a former sepoy of the Jammu and Kashmir Light Infantry, had said.