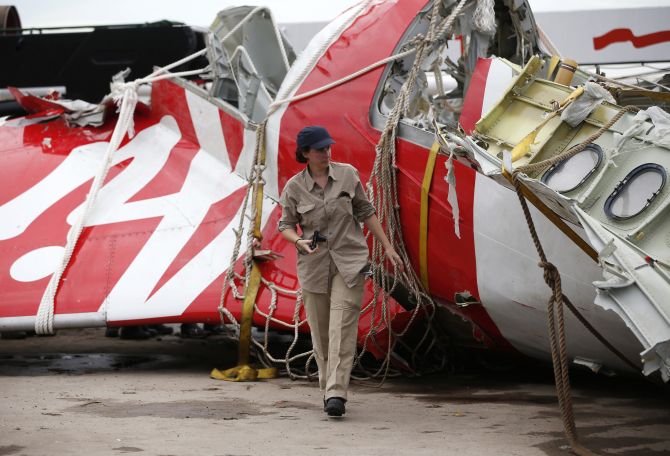 JAKARTA/SINGAPORE, Jan 12:  Searchers today retrieved the black box recorders of ill-fated AirAsia plane that crashed into the Java Sea two weeks ago with 162 people on board, Indonesian officials said.
“I received information from the National Transport Safety Committee chief that at 07:11 am (local time), we have managed to get part of black box or the flight data recorder (FDR),” Bambang Soelistyo, the chief of Indonesia’s search and rescue agency Basarnas, told reporters.
“What we have found and carried is the FDR” and we confirmed this as the object has a tag number and serial – PN-2100-4043-02 and serial number SN-000556583, he said.
“Now we are trying to locate cockpit voice recorder,” he added.
The black box recorders are important because they should contain the pilots’ final words and possibly various flight data.
Indonesia AirAsia Flight QZ8501 lost contact with ground control on December 28, less than half way into a two-hour flight from Indonesia to Singapore and crashed possibly due to bad weather.
In his last communication, the pilot of the Airbus A320-200 said he wanted to change course to avoid a storm. Then all contact was lost.
Only 48 bodies, including at least two strapped to their seats, have been found in the choppy waters.
Indonesia’s Transport Minister Ignasius Jonan assured the search to find the still untraced bodies would be funded by the State budget and the efforts would continue no matter how long it would take. (AGENCIES)