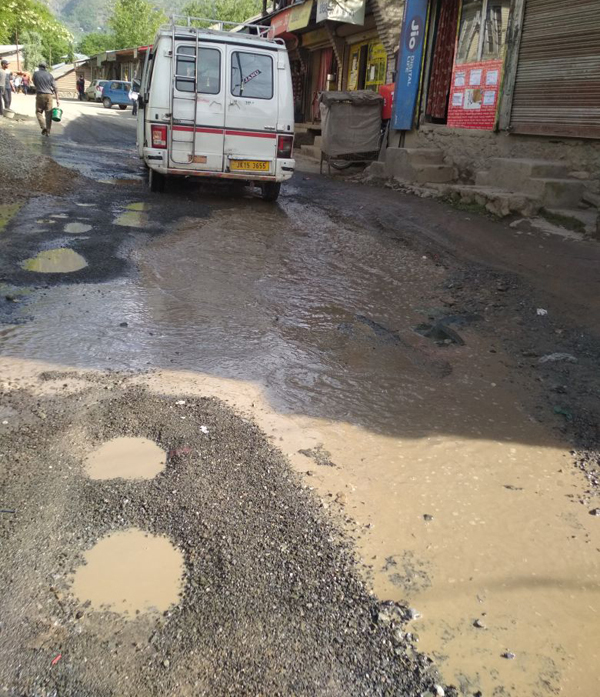 Suhail Bhat
Bandipora, Apr 28: Commuters traveling on Srinagar- Bandipora section of the highway are having a tough time these days as major portion of the road is strewn with deep ditches and potholes giving bumpy rides to passengers.
A 30 Kilometers road stretches from Sumbal to Bandipora in North Kashmir is in deplorable condition and people alleged that Government has not carried out any major repair work for several years.
Water stagnation and potholes on the roads are making it tough for motorists to drive in such poor conditions. “During rainfall, the vehicles get stuck in the wide pothole filled with rainwater at several places. It has been a big issue for the traffic movement here for a long time now, ” Riyaz Ahmad, a local said, adding the back-breaking journey discourages tourists to visit the famed Wullar lake, denting the tourism as well.
For last one year authorities are doing the repairs and yet the works remains incomplete. At a few locations, they took up minor repair works but still majority of road portion is yet to be completed and as a result, residents are forced to take detours. “Last year the work on the road was started but it never completed. The contractors moved in some of the material and equipment to the site but work was left in the midway. Only minor temporary work was done,” Sajad Ahmad, a local said adding the potholes resurfaced with one month.
The locals of several areas including Nusoo, Ajas, Sumbal, and Garoora alleged that traffic woes were mainly caused by the deplorable condition of the road and commuters had to spend twice as much time on the roads. “Because of poor roads, it takes us double the time to reach Srinagar. The journey is so unpleasant that the desire for the destination wanes on the way,” Owais Ahmad, a resident of Bandipora town, said.
He said the dust that comes out of the rough road surface caused throat infections during the dry season while the puddle water during the rainy season makes the road non-motorable. “Many vehicles have broken down due to appalling condition of the road,” the Bandipora resident added.
The locals, however, alleged that their worries have mounted ever since the road was taken over by the Roads and Buildings Department as the department failed to carry necessary repair work, “The earlier executive agency was at least taking care of craters and potholes. The R&B did not even do the proper repair work,” a local said.
Deputy Commissioner Bandipora, Hilal Simnane, said the pre macadamisation of the road is underway and the blacktopping would follow in the next two weeks, “The work on the road is going on and will be completed by the end of June this year,” he said.
Asked about the reasons behind the delay in repairs, he said:”The widening of the road at certain places overstretched the project but work is in full swing now.”