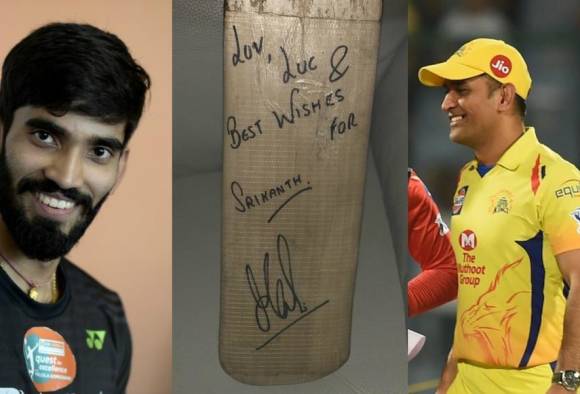 NEW DELHI:  Ace shuttler Kidambi Srikkanth is a big fan of Mahendra Singh Dhoni and he was in for a pleasant surprise when he received a cricket bat signed by the former India captain from BCCI selection committee chairman MSK Prasad.
Srikanth, who was briefly World No. 1 recently but is currently ranked No. 4, had asked Prasad for a gift from Dhoni.
Srikanth’s father KVS Krishna had introduced Prasad to wicket-keeping.
“I would like to inform you that Kidambi Srikanth is the son of my childhood ideal from Guntur who introduced me to cricket, i.E. Kittu uncle.
“Srikanth is a big fan of MS Dhoni. One fine day he has asked me a gift from MS Dhoni. I told if he can reach the top level in badminton, then he will get his gift,” Prasad said after handing over the bat to Srikkanth at the Pullela Gopichand Academy in Hyderabad yesterday.
Prasad said when he told Dhoni about Srikkanth’s desire, the former captain was more than happy to oblige.
“I have spoken about Srikanth’s wish to MSD. He was more than happy to hear this and he told me he himself is a badminton player and follows Indian badminton very closely. MSD has sent personally signed autographed bat to my house as a gift to Srikanth,” he said. (AGENCIES)