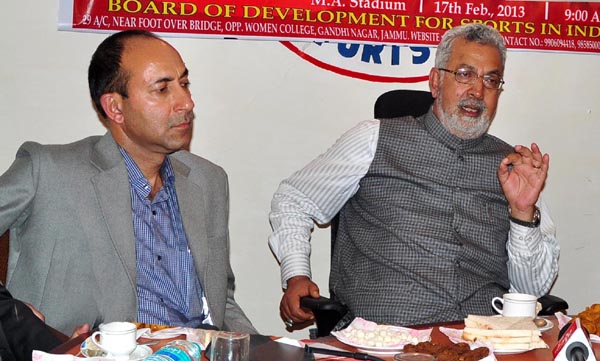 Excelsior Sports Correspondent
JAMMU, Feb 14: Minister for Medical Education and Youth Services and Sports, Taj Mohi-ud-Din today said he was keen on development of sports infrastructure in the State for which the State Government would seek all possible help from the Centre.
Interacting with the media persons in connection with the Jammu Marathon to be held on February 17, the Minister said that soon after he took over as the Minister incharge, he had directed that every middle and high school in the State should have playing teams in at least three disciplines of cricket, football and hockey, adding that the State has ample human resource in sports but the infrastructure needs to match with it.
When asked about various steps being taken by the Government to develop sports in the State, Taj said that he was still contemplating and had not taken a review of his department so far.
He, however, said that the department lacked necessary funds for the promotion of sports.
“There are not much funds in our plan for development of sports. We have around 6,000 employees and most of the funds are utilized in their salaries,” he said.
Taj, assured that he will “mobilize resources” and also said that he will ask the Central government for the necessary funding for various projects which the State is entitled to.
Meanwhile, Chairman Board of Development for Sports In India, Amit Sethi speaking on the occasion said that more than 10,000 participants, including Bollywood celebrities, are expected to run in the fourth edition of the Jammu Marathon, scheduled to be held here on Sunday.
“We are expecting 10 to 20,000 participants in the fourth edition of Jammu Marathon,” he said.
He further said that the event, which will feature Bollywood stars such as Raghuvir Yadav and Tia Bajpai, will carry a prize purse of about Rs 75,000, with the top athlete in both men and women’s category receiving a sum of Rs 21,000 each.
Runners-up in both the categories will get Rs 11,000 each while the second runners-up will receive a sum of Rs 5,100 each.
Sports Minister, while extending his support to the event said that the upcoming event will be dedicated to the women of India.
He assured organizers of all the possible support to make the event a success.
Taj also informed that the marathon will begin from the M A Stadium and will run across B C Road, Ambphalla, Kachi Chawni and other parts of the city before culminating at the Stadium.
The minister also informed that as a policy decision they have instructed all middle and high schools of the state to form various sports teams and have also told them to develop the playgrounds for children.
He said an Astroturf would be laid in Srinagar for which the tendering process has almost been completed, while an Indoor Sports Complex is being developed at Jammu.
Replying to a question as to why the salaries of the contractual coaches have not been released from last 15 months, the Minister claimed that the same have been released today and said that the more coaches will be employed soon.
On a question as to why Jammu and Kashmir State fails to implement the policies and decisions of the State Government with regard to promotion of sports, the Minister said that the decisions will be implemented in letter and spirit.
Secretary, J&K State Sports Council, Dileep Thusoo and the organizers of 4th Jammu Marathon were also present on the occasion. 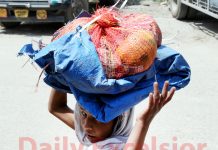 A girl carrying eatables walks towards her destination in Jammu. -Excelsior/Rakesh 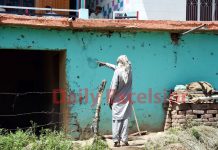 A man points to damage caused to his house in Pakistan shelling at Balakote sector of Poonch district on Tuesday. -Excelsior/Rahi Kapoor 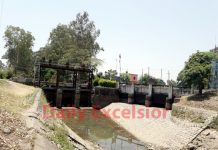 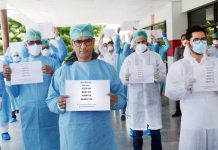 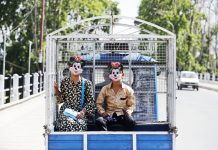 Congress and Independent Councilors of JMC during a protest demonstration at Jammu on Tuesday. 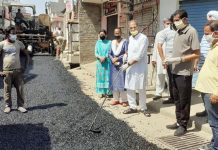 BJP leaders during a press conference at Jammu on Tuesday. 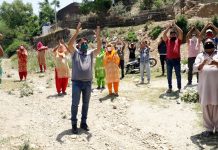