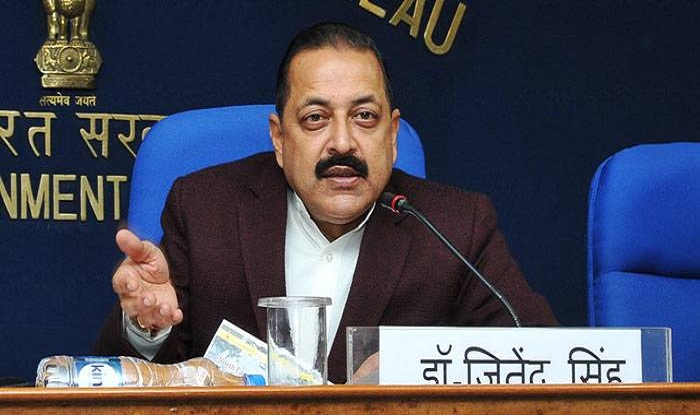 JAMMU, Dec 8: Taking serious exception to PDP president and former Chief Minister, Mehbooba Mufti’s statement calling for grant of divisional status to erstwhile Doda district and Pir Panjal range, Union Minister in PMO with independent charge of North Eastern States, Dr Jitendra Singh accused the PDP leader of creating a regional and communal divide in the State.
He also lambasted the National Conference (NC) chief and former Chief Minister, Dr Farooq Abdullah for demanding regional autonomy in the State saying that party during its decades’ long rule has denied autonomy to basic institutes of democracy in the State and hence has no right to exploit the sentiments of masses on the name of regional autonomy. “NC’s ploy is nothing except the autonomy for family and relatives”, he added
Talking to reporters at the sidelines of a function held here at Gandhi Nagar today in connection with introduction of Sarpan-ches and Panches from Chenani -Ghordi constituency, of Udhampur district, Dr Jitendra Singh said it is unfortunate that PDP leader has raised the issue when the Parliamentary and Assembly elections are round the corner.
“This showed the mind set of PDP leader and her party which wanted to divide the people of this region on communal lines”. Maintaining that there is no justification in her demand, the Union Minister said the people of the hilly areas of Jammu have never made such a demand as they believed in co-existence, pluralism and brotherhood. It is the PDP leader who is instigating them to raise the demand, he added.
While outrightly rejecting the demand, Dr Jitendra Singh said it has no justification at all. “The demand is deplorable and part of PDP’s divisive politics. She (Mehbooba ) is trying to provoke people by giving communal angle to the issue and divide them on the basis of religion”.
The people of erstwhile Doda district lived in complete peace and harmony for years together and there was no violence in this part of the State like Kashmir valley and hence such statements are condemnable and unfortunate, he said, adding that the demand has not come from the people of any area in Jammu region.
He advised the PDP leader to refrain from such statements given for political gains and vote bank politics which are slated to create a wedge among the masses. Instead of working to bring people of different communities together, PDP leadership is trying to divide them on communal and regional lines, Dr Jitendra Singh added.
The Union Minister also did not spare the National Conference (NC) patriarch, Dr Farooq Abdullah who has said that the regional autonomy will be priority of his party and main poll plank in the elections. Rejecting this Dr Jitendra Singh said that those who denied grass root democracy in the State are now demanding the regional autonomy to exploit the masses again.
He said “what autonomy they talk about”? “I think they are talking about the autonomy for their families and relatives because during their rule the party was not ready that democracy should percolate to grass root level in the State.”
The Union Minister said had they (NC) been so sincere towards the autonomy of basic institutions of democracy and not been particular for the autonomy of their family they would have since implemented the 73rd and 74th amendments of Indian Constitution meant for empowerment of Panchayats and ULBs.
Lashing out at Congress, Dr Jitendra Singh said the party is also responsible for this. He said only one good work done by former Prime Minister and Congress leader, Late Rajiv Gandhi was introduction of 73rd and 74th Constitutional amendments in the country but the Congress party which was the coalition partner of NC in the State number of times did not show any seriousness in its implementation.
He said though BJP continued protests for the same for over two decades but both NC and Congress who ruled the State maintained a stoic silence over the issue. Maintaining that BJP is committed to strengthening of basic institutes of democracy in the State, the Union Minister said “we are trying to get the 73rd and 74th amendments implemented to make Panchayats and Local Bodies more powerful so that direct funds are transferred to these basic institutes of democracy”.
“If they (NC and Congress) were so sincere why did not they concede BJP’s demand regarding empowerment of Panchayats when they were in power”, he asked?
In response to a question that Pakistan Prime Minister, Imran Khan had said that Mumbai attack on November 26, 2008, was a terrorist attack, Dr Jitendra Singh said it is the result of over four and half years leadership of Prime Minister, Narendra Modi that world has come round the India’s stand on terrorism.
He said those countries including Pakistan which were not accepting India’s views and stand against terrorism have now come to accept it and Pakistan which was totally isolated and cornered in the comity of nations has been left with no alternative but to accept India’s stand, he added.
On the statement of Lt. Gen (retd) S Hooda that surgical strike was given much hype and politicized which should not have been done, Dr Jitendra Singh said it was Congress which gave hype to it and not BJP. However, he said, he won’t like to comment on an individual statement.
Earlier, while introducing new Sarpanches and Panches from Chenani Ghordi Constituency, Dr Jitendra Singh urged them to work for the welfare and betterment of their people and for the development of their respective Panchayats with honesty and dedication.
He said after taking over the reigns of Government by Narendra Modi in the country in 2014, a new atmosphere has been created in the country and a new work culture has emerged so we all have to work for nation building under the changing atmosphere.