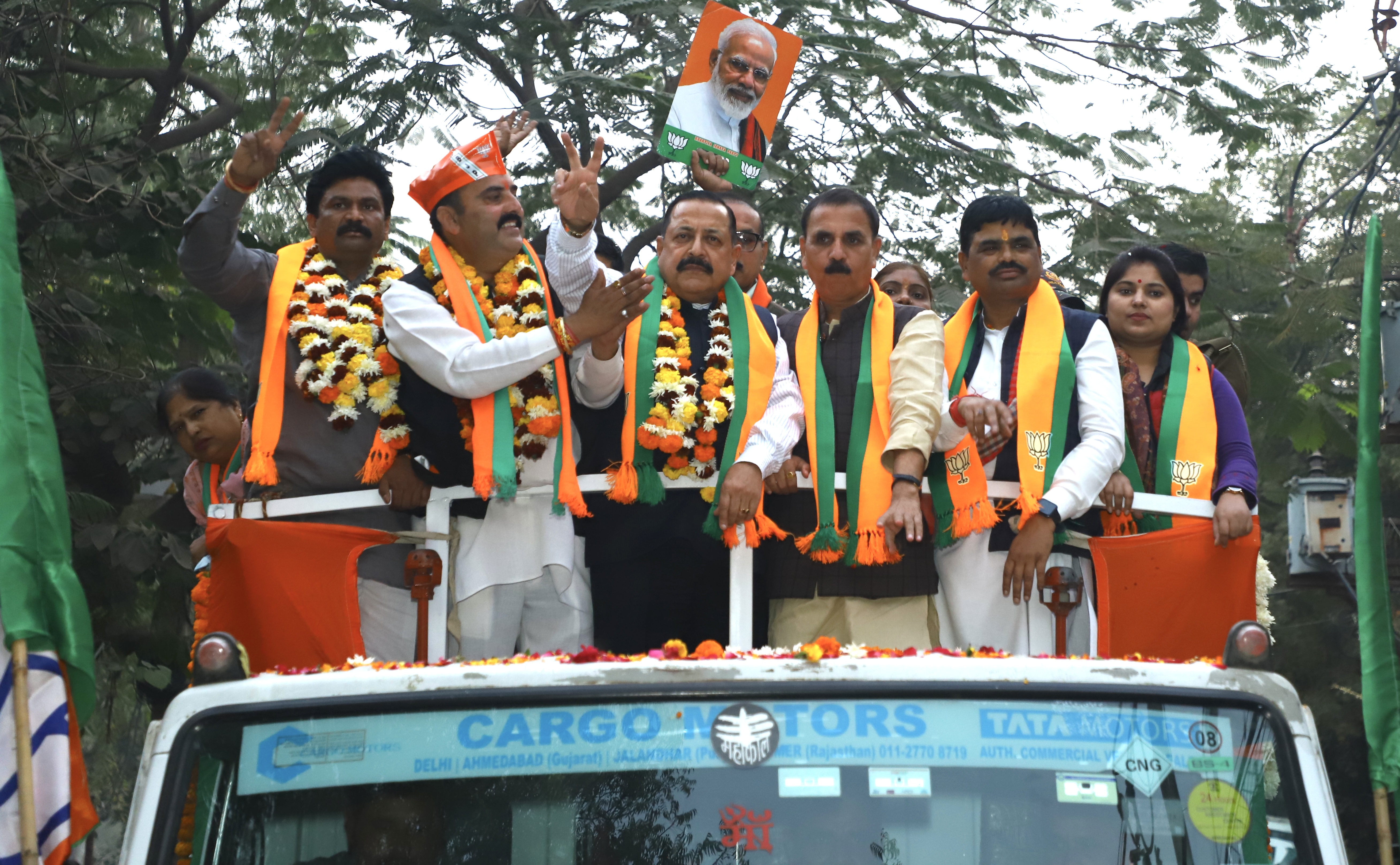 NEW DELHI, November 30 : Union Minister Dr Jitendra Singh today said that the capital-city of Delhi needs a “Triple” engine Sarkar to make it truly a world class cosmopolitan city. BJP government at the Centre , BJP govt in the State after next Assembly election and a BJP run Municipal Corporation, comprising a “Triple” engine control can only clear the mess created by the Aam Aadmi Party (AAP, he said.
Addressing a series of road shows for the upcoming MCD polls, Dr Jitendra Singh expressed hope that after the decisive mandate in local elections, people of Delhi will vote BJP in the next Assembly polls. The Minister said, not only Delhi electorates, but the entire country is fully convinced that India under Modi is taking bold and transformative decisions in all spheres of life.
The Minister said, amid stories of gloom and doom in western and advanced countries, India has emerged as an economic bright spot and many see it soon becoming a manufacturing hub of the world.
Dr Jitendra Singh pointed out that the BJP ruled States are getting benefits of double-engine governments with Modi at the Centre giving a big push to development projects and the implementation of different schemes have got a momentum. He said, many of the Central schemes in Health, Education, Housing and Drinking Water are getting supplemented by BJP governments in States, thus providing full coverage to beneficiaries at shorter span of time.
Dr Jitendra Singh said, Delhi will become a Model State/UT of India, when the Triple-Engine government will work with breakneck speed, not only to solve all the local problems, but would be able to provide top class Education, Health, Water and Transport facilities to the people of the capital city.
Dr Jitendra Singh also charged the AAP Government in Delhi with various scams, including the Liquor scandal, in which CBI probe is on against Deputy Chief Minister Manish Sisodia. He said, Health Minister is already in Hawalat in a Hawala case, whose misuse of Tihar Jail facilities are being watched by entire country.
On Education front also, Dr Jitendra Singh pointed out that over 24,000 posts of teachers were lying vacant in Delhi schools and 22,000 contractual teachers awaiting permanent employment, while about 600 vocational teachers hired by the government were not ready to work due to poor salary.
Pointing to another Fake promise of the Delhi CM to clean Yamuna, Dr Jitendra Singh lamented that the holy river is more polluted today than it was when AAP formed government in Delhi seven years ago. He said, Pollution in Yamuna has worsened with the faecal bacteria level being at a record high of 14 times and this has been revealed by the December 2021 water quality status report by Delhi Pollution Control Committee (DPCC). The Minister also felt said that Chhath devotees from Bihar and UP this year were seen standing in the toxic foam-laden Yamuna river near Delhi’s Kalindi Kunj to offer prayers to the Sun God.
He also said, the pollution became worse this year and Delhi’s Lieutenant Governor Vinay Kumar Saxena had to write to Punjab CM stating that the volume of Parali fires in Punjab has increased since 2021.