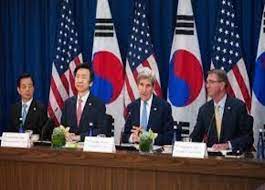 Washington, Dec 4: US Secretary of Defense Lloyd Austin and Japanese Defense Minister Nobuo Kishi have held a phone conversation, during which they agreed to hold a meeting in a 2+2 format with the nations’ foreign policy chiefs, the US Department of Defense said.
During the conversation, Austin and Kishi expressed commitment to security and stability in the Asia Pacific region, as well as pointed out the strength of the US-Japanese alliance. “Secretary Austin and Minister Kishi discussed efforts to deepen defense cooperation to maintain regional deterrence, and agreed to hold a Security Consultative Committee ‘2+2’ meeting at an early date,” the Pentagon said in a statement on late Friday.
The ministers also stressed the importance of close trilateral cooperation between the US, Japan and South Korea.