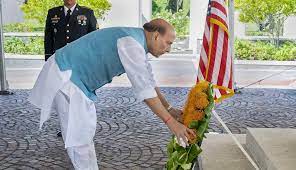 ULAANBAATAR, Sept 7:Defence Minister Rajnath Singh on Wednesday paid tributes to Mahatma Gandhi at his statue here in the Mongolian capital.
Singh’s visit to Mongolia from September 5 to 7 is the first-ever tour to the East Asian country by an Indian defence minister.
“Paid tributes to Poojya Bapu in Ulaanbaatar,” Singh tweeted, sharing a photograph.
On Tuesday, the first day of his engagements here, Singh held bilateral talks with his Mongolian counterpart Lt Gen Saikhanbayar Gursed and also called on President Ukhnaagiin Khurelsukh and Chairman of State Great Khural (Parliament) G Zandanshatar.
Singh held talks with the Speaker of Mongolian Parliament Zandanshatar and complimented him on his consistent support to promote and expand shared heritage of Buddhism.
He also called on the President of Mongolia and the Commander-in-Chief of Armed Forces, Khurelsukh on Tuesday. During their meeting, the two leaders recalled their strong bonhomie and previous interaction in 2018 when together they laid the foundation stone for the ongoing Oil Refinery project being undertaken by assistance from India
Defence Minister Singh is on a five-day visit to Mongolia and Japan from Monday with an aim to expand India’s strategic and defence ties with the two countries in the backdrop of evolving regional security matrix and geo-political turmoil. (PTI)