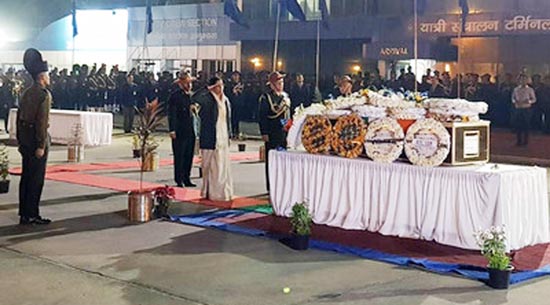 The mortal remains of the officer, who died in the line of duty yesterday, barely six days before his 23rd birthday, was flown to Delhi in a Dornier aircraft.

Sitharaman paid respects by laying a wreath on the tricolour-wrapped coffin, which was laid at the Palam Air Force Base after the aircraft reached around 6:20 PM.

Earlier, Minister of State for Defence Subhash Bhamre and Rawat also paid tributes to the soldier of the 15 Jammu and Kashmir Light Infantry (JAKLI), by laying wreaths. (AGENCIES)