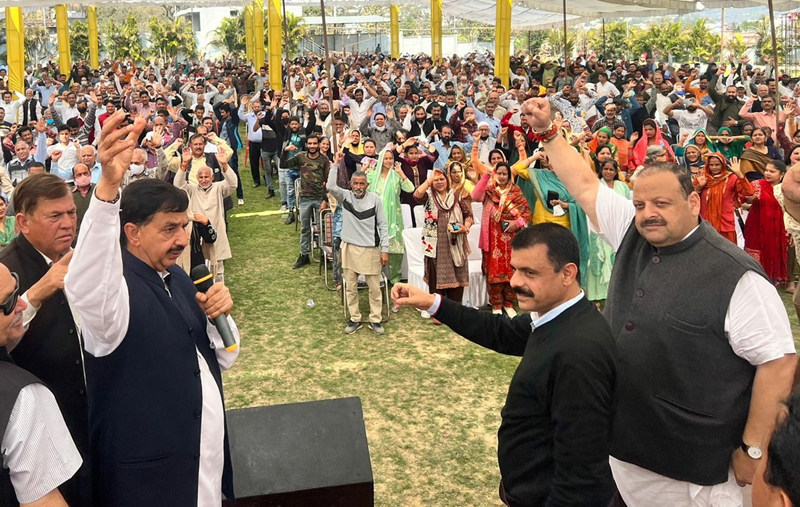 UDHAMPUR, Mar 13: Death anniversary of former BJP MLA Lala Shiv Charan Gupta was observed today by party workers and supporters, led by former MoS, Finance and IT and Ex-MLA Udhampur constituency, Pawan Kumar Gupta, here today.
The event was also attended by several prominent local leaders who recalled yeoman services of Lala Shiv Charan Gupta rendered to the people of Udhampur. Senior BJP leaders Davinder Singh Rana, Satish Sharma and Baldev Raj Sharma, President Municipal Council Udhampur Jogeshwar Gupta also addressed the gathering.
Speakers threw light on life history of Lala Shiv Charan Gupta who was jailed twice by the Sheikh regime during Praja Parishad agitation. He was elected to the State Assembly for the first time in the year 1962 on the mandate of Praja Parishad. In the year, 1996, Lala Shiv Charan won on the mandate of BJP and was leader of Opposition in the State assembly.
While addressing the gathering, Pawan Gupta, who is also the son of Lala Shiv Charan Gupta, recalled fond memories of his father who was elected to the State Assembly four times and worked in various capacities in social and political circles.
Pawan Gupta said that vision and tireless dedication of Lala Shiv Charan Gupta for the prosperity of the people of Udhampur and his generous and loving heart is an inspiration to all for the generations to come. “His physical form may have departed our world 14 years ago but his eternal light shines on us through the heavens guiding us through the more challenging paths of life, he added.
DDC Chairman Lal Chand, DDC members, Sarpanches and Panches also addressed the gathering.