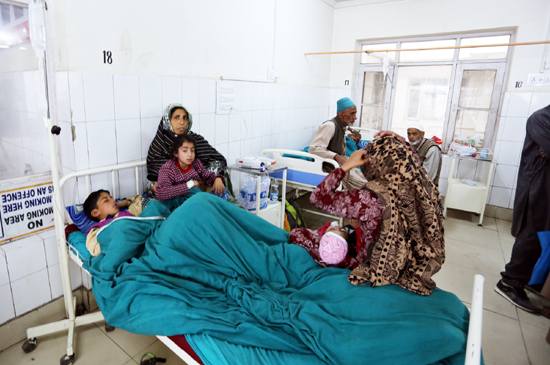 Waseem Ahmad
Srinagar, June 17: Dearth of doctors and lack of proper infrastructure in Sub-District Hospital (SDH) Tangdhar is making the patients of this hilly region suffer and forcing them to cover long distance for treatment.
The residents of the area alleged that in absence of proper health care facilities in the hospital, they are forced to visit private clinics or other hospitals and spending huge amount of money.
They said the hospital lacks basic facilities including medicines, availability of doctors, theatre facilities, cleanliness etc. “The non-availability of a child specialist, dermatologist, gynecologists and other specialist doctors in the hospital is taking a heavy toll on the patient care.  For a simple checkup, we have to take our children or pregnant women either to Srinagar hospitals or private clinics,” Abdul Razak, a resident of Tangdhar said, adding: “The critical patients who are referred to other hospitals often die on their way.”
Another resident, Ghulam Mohammad said that the worst sufferers are the pregnant ladies as due to the non-availability of a gynecologist, they have to consult private doctors for a mere check up and during the time of a delivery case, they have to hire a private cab that charges a huge amount to reach Srinagar hospitals.
He alleged that there are many doctors appointed in the hospital but only two or three doctors are present and rest are not attending their duties as they are sitting in Srinagar.
The residents said that the hospital also lacks para-medical staff and they are being forced to conduct simple tests like USG from private clinics.
Dr Mohammad Yousuf, Block Medical Officer (BMO) Tangdhar while admitting the lack of doctors in the hospital said that they had been conveying to the authorities for last 10 years about the issue but nothing has been done so far. “The entire block is facing dearth of doctors. About 20 posts of doctors are lying vacant in the entire block. In SDH Tangdhar, out of allotted 12 doctors, only six doctors are available and rest six posts of doctors are vacant. Similarly, the hospital is also facing shortage of almost 50 percent of the Para-medical staff. One of the most important posts that are lying vacant is of Gynecologist and a Child Specialist,” he said
Refuting the allegations of non-availability of life saving drugs and tests not being conducted in the hospital, the BMO said that the allegations are baseless as they get enough supplies of drugs and all the basic tests are being conducted there.