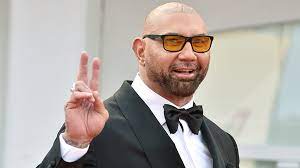 Los Angeles, Aug 6:
Netflix is in final negotiations with action star Dave Bautista to lead its upcoming film “Unleashed” from director Jeff Tomsic.
According to entertainment website Deadline, the film is written by “Blockers” scribes Jim & Brian Kehoe.
Bautista is in talks to star and produce with his partner Jonathan Meisner alongside Good Fear’s Chris Bender and Jake Weiner.
He will essay the role of a police officer who is best friends with a canine partner that can sniff out any crime. When Boomer dies on the job, the cop pledges no more pooch partners, until he is teamed with Zeus.
The former WWE star will next be seen on Netflix in “Glass Onion: A Knives Out Mystery”. The film will have its premiere next month at TIFF. He has also wrapped “Knock at the Cabin” for Universal and is shooting “Dune 2” for Warner Bros. (PTI)