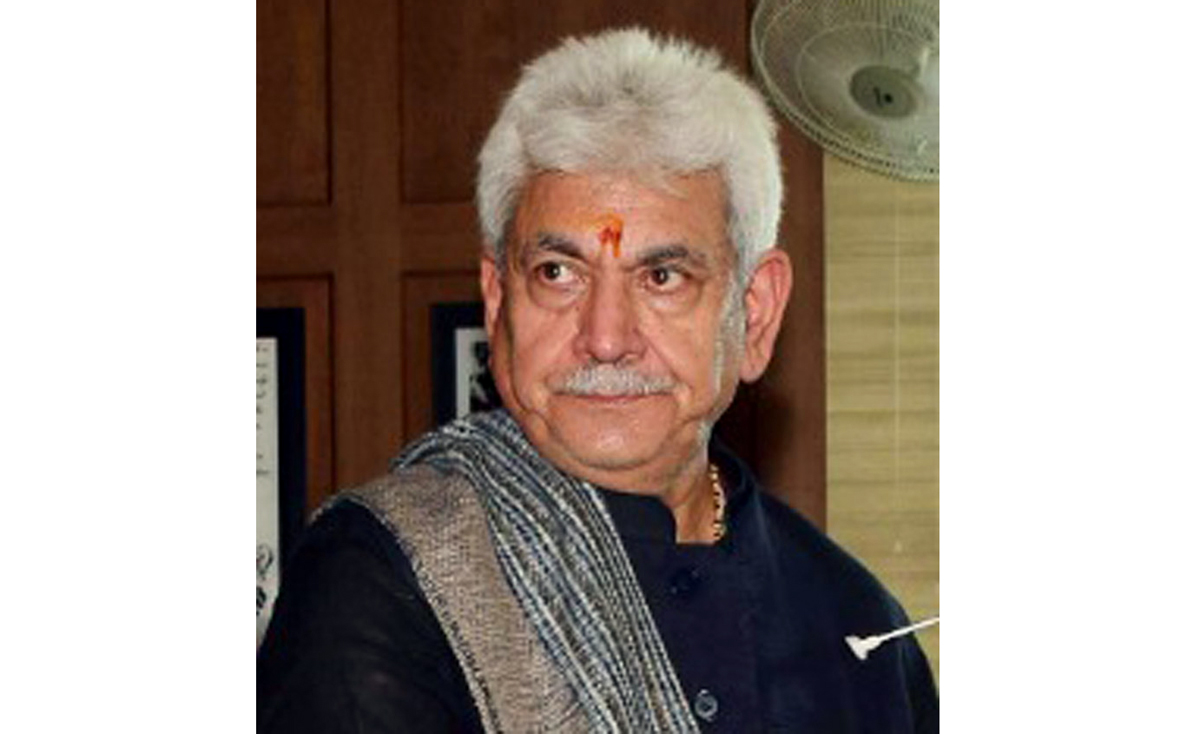 Takes dig at family rule, says selected few were known in J&K
*Need to raise income as salaries consume large part of budget
Sanjeev Pargal
JAMMU, Sept 10: Lieutenant Governor Manoj Sinha today took an indirect dig at the “family rule” saying such was the system that only selected families are known in Jammu and Kashmir because of the conditions prevailing earlier and declared that the culture of calendars for bandhs and hartals has been finished and there has been significant improvement in law and order situation in the Union Territory.
In his inaugural hour-long address at two-day conclave of Gulistan channel named `Badalta Jammu, Kashmir and Ladakh’ here this afternoon, Sinha stressed for increase in revenue generation in Jammu and Kashmir though he disclosed that GST, Excise, ST and other taxes have recorded 25 percent growth.
“Jammu and Kashmir was earlier trapped in fear. Now, we are trying to establish fear-free atmosphere. When calendars of education were released in other States; in J&K, calendars of bandhs and hartals were issued. This practice has now been finished,” he added.
Asserting that there has been significant improvement in law and order situation in Jammu and Kashmir, Sinha said 182 militants, 44 of them foreigners, have been killed, 89 terror modules busted and 67 Over Ground Workers (OGWs) arrested this year so far.
“From time-to-time earlier, peace was bought in Jammu and Kashmir. Now, we are not buying peace but making efforts to establish peace,” he reiterated. He again took a dig at separatists, albeit without naming them, saying while common man’s kin were pushed to militancy, their wards studied abroad.
Sinha said some youth were also misled that there were no employment opportunities but added that there are many areas in Jharkhand and Chhattisgarh which have more unemployment. At the same time, he asserted, this remained the Government’s priority area and the Mission Youth is also working at it.
The Lieutenant Governor said the conclave has been organised at a time when India has become fifth largest economy of the world leaving behind the country which ruled India.
“Jammu and Kashmir has also been changing,” he asserted.
Taking a dig at family rule, Sinha said very few people here know the names of Mahatma Gandhi and Sardar Patel’s fathers
“Sardar Patel united India. he brought together 500 States (at the time of independence). But here, only selected families were known. This was the system. Wherever there is family rule, talent and ability remain hidden. But, this system has been changed. I won’t claim that everything has changed but definitely the system which worked for few is now working for common man. This is the change,” he said.
He referred in detail various reports of different national surveying agencies including NITI Aayog which showed Jammu and Kashmir well ahead of national average and described this as changing Jammu and Kashmir. The UT also stood best in transparency and COVID management.
Jammu and Kashmir is first to launch District Good Governance Index. Tourism has gone all time high in last 6-7 months. During last year, 11,578 recruitments were made taking total to 30,000 in three years. There has been highest ever air traffic at Jammu and Srinagar airports. Among all 4290 Panchayats, barring 8-10 where land is not available, every Panchayat has playfield, the Lieutenant Governor said.
Maintaining that vast part of budget is spent on salaries in Jammu and Kashmir which has more Government employees as compared to Bihar, Sinha referred to issue of the daily wagers saying nearly one lakh of them were recruited on Rs 2000-3000 per month with assurance of regularization after seven years. No Selection Committee was constituted for making such appointments, he said.
The Government has to incur huge sum on salary, pension, gratuity etc of the employees every year, he added.
However, he asserted, the present Government increased their daily wages to Rs 300 per day and has also set up a Committee which will submit its report by the end of this month.
Stressing the need for increase in revenue generation, he said the Government needs people’s support for the purpose.
Pointing towards Chamber of Commerce and Industry president Arun Gupta, who was also sitting in the conclave, Sinha said economy of Jammu hasn’t been affected with Durbar Move but the Government has saved Rs 400 crore expenditure every year by ending the bi-annual practice.
“When train services were extended to Katra from Jammu, I was the Railways Minister and there were concerns that traders of Jammu will suffer. However, development of one area can’t be stopped at the cost of other. But, at the same time, we have been taking steps for further development of Jammu,” Sinha said.
He added that Rs 1000 crore worth works on National Highways and tunnels are going on in Jammu and Kashmir.
“Distance from Jammu to Srinagar has been reduced from 10 hours to five and five and half hours and after completion of some works, I guarantee that it will further come down to four and half hours to four hours,” the Lieutenant Governor said.
The conclave was attended by Omar Abdullah, former Chief Minister and National Conference vice president, who was joined by a number of former Ministers and ex-legislators from the party, Subash Choudhary, Chairman JK Media Network, Tarun Chugh, BJP national general secretary, Sanjeev Pargal, president, Press Club of Jammu, Ravinder Raina, BJP UT chief, Vikar Rasool, PCC (I) president, Sham Choudhary, former Minister, Altaf Bukhari, president Apni Party, Raman Bhalla, PCC (I) working president, Arun Gupta, president Chamber of Commerce and Industry, Drakshan Andrabi, Chairperson Wakf Board, Hina Bhat, Chairperson Khadi and Village Industry Board, Surinder Choudhary, former MLC and many other senior political leaders and officers from civil administration and Police.

Farooq is accused, that’s why he is called by ED: Chugh

BJP national general secretary Tarun Chugh, Incharge Jammu, Kashmir and Ladakh, today called for an open debate with political parties on changes in the Union Territory as he declared that three families haven’t taken contract to rule it forever.
Participating in debate on ‘Badalta Jammu, Kashmir and Ladakh’ of Gulistan channel, Chugh also charged Farooq Abdullah, albeit without naming him, with being involved in conspiracies which was the reason that he was being called for questioning by the Enforcement Directorate.
He declared that three families of Abdullahs, Muftis and Nehrus haven’t taken contract that only those born to them will become the Chief Minister of Jammu and Kashmir.
“I’m ready for debate. Let’s have an open debate. Call J&K president and MPs of my party as well as that of Farooq Abdullah’s (National Conference). My MPs Dr Jitendra Singh and Jugal Kishore Sharma secured around 20 lakh votes each. They (NC MPs) took just 2000 votes. We are answerable to entire Jammu and Kashmir and not just one part,” the BJP leader said.
Chugh said Prime Minister Narendra Modi has clear vision on Jammu and Kashmir and he wants empowerment of the people and not particular families.
“We want Jammu and Kashmir to become tourist and not terrorists’ capital,” he added.

Not even rupee of
exchequer will be
spent on Sinha

The Lieutenant Governor declared that not even a single rupee of Jammu and Kashmir exchequer will be spent on Manoj Sinha and his family.
Maintaining that cancellation of three examinations (Sub Inspectors, Financial Accounts Assistants and JE Civil) was not injustice but justice, he said there can be no discrimination with the youth with talent and ability.
“Some people were running shops on the name of providing job opportunities. We have close these shops. We will take the case to logical conclusion and all accused will face action,” he said and reiterated that all three exams will be held in October.
Sinha declared that the system when jobs were given on slips is gone. Now, only talent and ability of the youth matter, he said.

Stoning has come down, says Omar; calls for Assembly polls

Former Chief Minister and National Conference vice president Omar Abdullah said today that incidents of stoning have come down and it’s good change even as he called for conduct of Assembly elections in Jammu and Kashmir but with a level playing field for all political parties.
At the conclave of Gulistan channel’s ‘Badalta Jammu, Kashmir and Ladakh’, Omar was asked by the questioner whether incidents of stoning have indeed come down and normalcy has returned post August 5, 2019 incidents.
“Whether the mindset has changed or its under pressure but random stoning is not seen. Whatever the way, it’s good. We welcome this,” he said.
Omar, however, didn’t agree that situation has changed in Kashmir Valley and normalcy has returned.
“Leave aside downtown. Even in the uptown, people don’t feel safe. A person holding even a small Government post wants 10 security guards. Traffic lights are stopped for convoy of VVIPs. I live on Gupkar road. I see this happening,” the National Conference leader said.
On Assembly elections in Jammu and Kashmir, Omar said the polls haven’t been held for last eight years.
“There was a commitment in the Parliament that Assembly elections will be held soon after the Delimitation Commission report. We were told that a meeting would be called and elections dates announced. The Commission has submitted report long back and we are waiting for the polls to be held,” Omar said.
On the Government claim that there are already 30,000 elected representatives in Jammu and Kashmir, Omar shot back: “there is 3-tier Panchayati Raj System in Himachal Pradesh also then why Assembly elections are being held there”?
Admitting that powers with the Government will be very less in the Union Territory, Omar, however, said the elections should be held so that people get elected representatives.
“Let the elections be held. Rest the people will decide. However, there should be level playing field for all political parties,” he asserted.
Omar said political uncertainty will end with the elections.