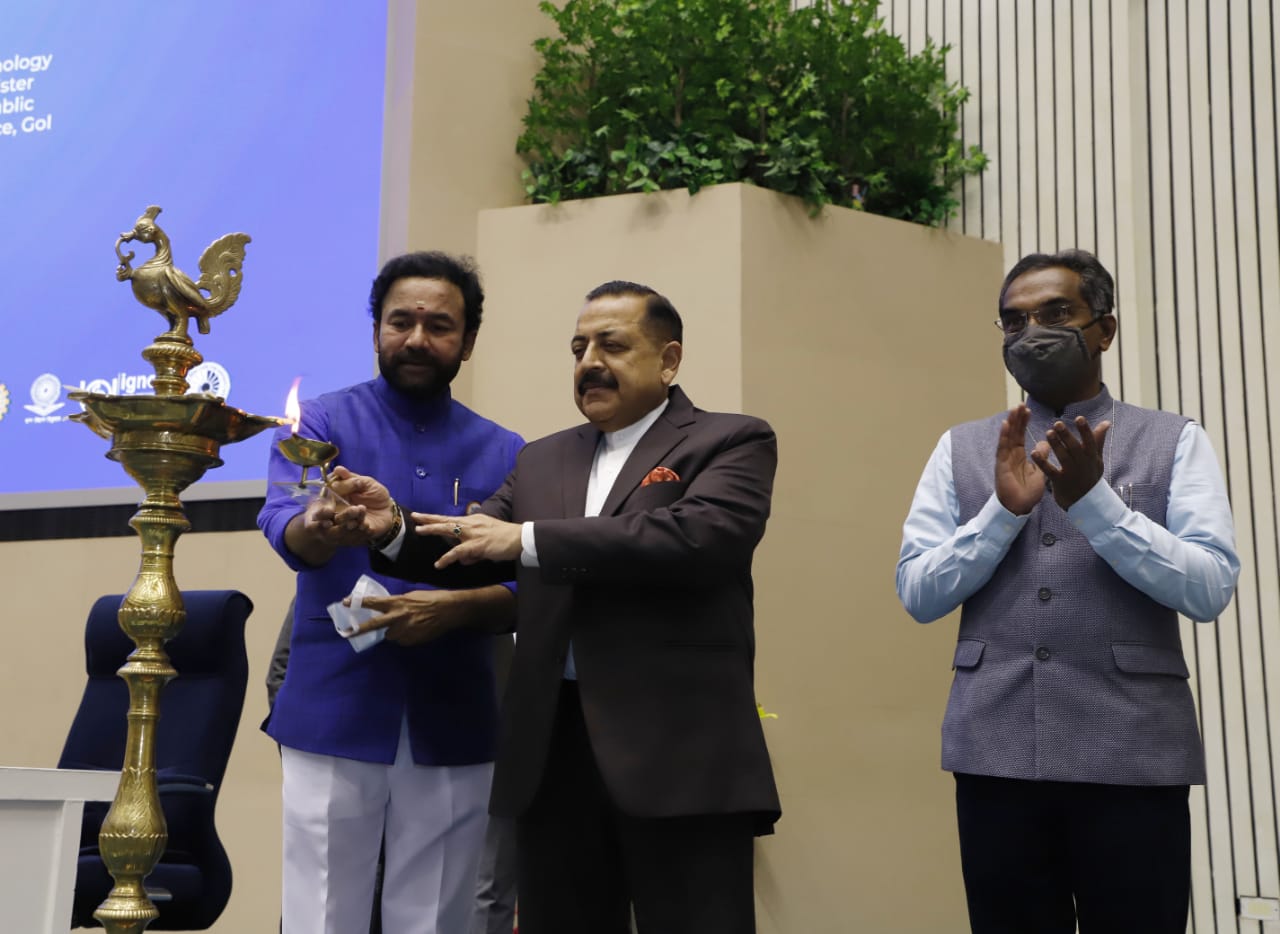 NEW DELHI, Feb 22 : Union Minister of State (Independent Charge) Science & Technology; Minister of State (Independent Charge) Earth Sciences; MoS PMO, Personnel, Public Grievances, Pensions, Atomic Energy and Space, Dr Jitendra Singh said here today that cultural ethos are essential for optimal use of scientific tools.
Speaking at the Inaugural function to mark “ Vigyan Sarvatra Pujyate”, a pan-India 75 location program , the Minister cited example saying for instance if a child is given a smart phone with multiple applications, he may be too innocent to understand what application to use for his benefit and may not be possible for the parents to sit on guard beside him every moment, but if he has been imparted the civilizational “Sanskar” and ethos, then he himself will be able to draw the line to use the smartphone to avail of the applications which enable his healthy growth and will himself dissuade such applications which could lead him astray, he said.
Dr Jitendra Singh said, “Vigyan Sarvatra Pujyate” has the grand aim of incorporating India’s science and scientific achievements in our cultural ethos. The goal is also to take the science and scientific thinking to the common man, where he can benefit by imbibing scientific information and innovations and hence develop a deeply scientific mind, he added.
Tracing the legacy of scientific achievements in the last 75 years, Dr Jitendra Singh said that under Prime Minister Narendra Modi, technology has entered every household and now it is for us to decide to get the optimum results from the new scientific breakthroughs. He said, PM Modi on numerous occasions has highlighted the role of science and technology in achieving our national and international goals and motivated us to nurture scientific temper and take science in mother tongue to people.
Dr Jitendra Singh pointed out that India’s scientific laboratories as well as scientific manpower now compete with the best in the world. He said, the world’s best corporations and companies such as Alphabet (the parent company of Google), Microsoft, Twitter, Adobe, IBM etc are being headed by Indians or Indian Origin people, who have got their basic scientific training in our own scientific institutions. The Minister said, we have gifted the world best brains with strong cultural heritage.
Dr Jitendra Singh said, to get the maximum fruits and benefits out of science & technology, we all need to inculcate a scientific mind-set and to achieve that, access to the scientific information and knowledge is must. He said, from Kashmir to Kanyakumari and from Kachch to Kamprup, the mega event, “Vigyan Sarvatra Pujyate” (Universal Reverence for Science), is being organised in 75 different cities across the country to mark the National Science Week (22-28 February 2022) and popularise science among the general public. The event is part of the “Azadi Ka Amrit Mahotsav” (celebrating the 75th Year of Indian Independence) to pay homage and showcase the achievements of the 75 glorious years of India’s Independence. It is being coordinated by Vigyan Prasar, under the aegis of the Ministry of Culture, Office of the Principal Scientific Advisor (PSA) and other Ministries of the Government of India.
Dr Jitendra Singh said, our government firmly believes that science and its innovations can solve most of our problems all across the sectors such as rural and urban sector, health, infrastructure, defence and many others. He informed that even for the Covid-19 pandemic, Indian laboratories and hundreds of our scientists worked day and night to take on this virus head-on.
Dr Jitendra Singh said, we are bound to work towards achieving not just 100% literacy rate but 100% scientific literacy rate. He added that Vigyan Prasar has commenced an ambitious programme in this direction, Project Vigyan Basha, to communicate science in various Indian languages. Including Sanskrit, they have begun work in Urdu, Kashmiri, Punjabi, Marathi, Kannada, Tamil, Telugu, Bengali, Nepali and Assamese. I direct them to speed up this activity and commence activities on all the Indian languages under the eighth schedule of the constitution.
Dr Jitendra Singh also announced creation of a Unified Science Media Centre, which will cut across all the departments to present the recent developments on science and technology to the common masses with a major focus on the research and innovation happening in our own scientific laboratories and research institutions. He said, Neutral nodal agency for science communication, Vigyan Prasar has been given this charge and the unified media centre will be catering to all kinds of media including print, electronic, social and digital media.
The programme will end with a grand valedictory function. It will coincide with the National Science Day, celebrated on February 28 every year since 1987 in remembrance of Nobel Laureate Sir C.V. Raman’s path-breaking discovery of the Raman Effect in 1930. National Science Communication Awards to this year’s awardees, and prizes to the winners of various contests held as part of the Mahotsav would be presented. Information on Vigyan Sarvatra Pujyate is available on www.vigyanpujyate.in
Dr K Vijay Raghavan, Principal Scientific Adviser, Government of India, Dr S. Chandrasekhar, Secretary Department of Science and Technology, Dr Parvinder Maini, Scientific Secretary, Office of PSA and Dr Nakul Parashar, Director Vigyan Prasar and other senior officials joined the inaugural event.