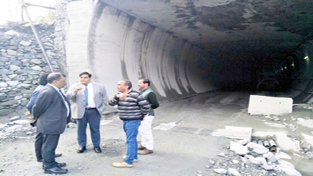 Excelsior Correspondent
BANIHAL, Apr 3: Chief Secretary B B Vyas today called for expediting work on new Qazigund-Banihal tunnel so that it is commissioned by this year end.
The Chief Secretary travelled from Srinagar to Jammu by road this afternoon to personally take stock of the road condition and progress of upgradation works on the highway.He was accompanied by Home Secretary, R K Goyal, District Development Commissioner, Ramban, Tariq Hussain Ganai and other officers of the civil administration and the executing agencies.
While taking stock of the progress of work on new Qazigund-Banihal tunnel, the Chief Secretary was informed that 80% work was complete on the 8.50 KM tunnel and it would be open for traffic by this year end, reducing the road distance between Banihal and Qazigund by almost 16 KMs.
Construction of the tunnel was started in 2011 as part of upgradation of National Highway-44 to four lanes. The new tunnel is located 400 Mtrs lower than the existing Jawahar tunnel, which would make it less prone to avalanches and other weather vagaries.
He was informed that it is a double tube tunnel consisting of two parallel tunnels – one for each direction of travel. Each tunnel is 23 ft wide and has two lanes of road. The two tunnels are interconnected by a passage every 500 mtrs for maintenance and emergency evacuation. The tunnel will have forced ventilation for extracting smoke and stale air and infusing fresh air. It will have state of the art monitoring and control systems for security.
The Chief Secretary also reviewed the progress of work on upgradation of Ramban-Nashri and Chenani-Udhampur stretches of the highway, Katra-Banihal rail link and other related connectivity projects including the by-pass bridge coming up in Ramban area.
The Chief Secretary was informed that the entire designated length of 326 km of the Srinagar-Jammu highway has been awarded and 4-lanning work has been completed in 177 km length, while the project in 149 km length is under implementation.