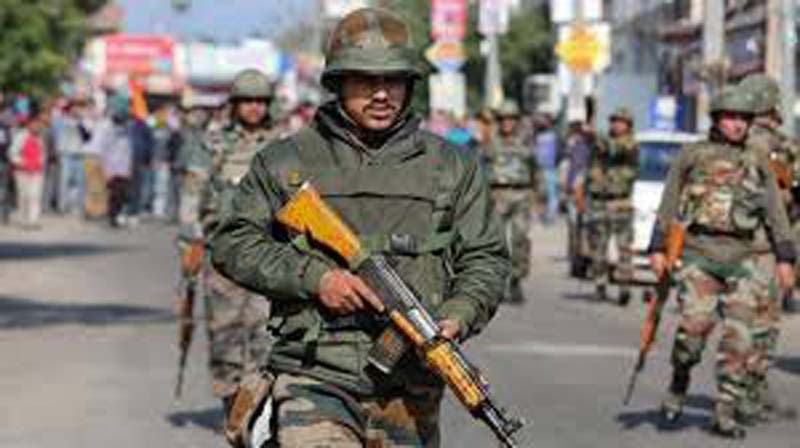 Excelsior Correspondent
Jammu, July 3: A Central Reserve Police Force (CRPF) personnel, who was injured last night in an encounter in which an ISJK commander was also killed in Malbagh area of Srinagar outskirts, succumbed to his injuries later.
A gunfight raged between militants and security forces last night at Malbagh, Srinagar. In the initial encounter, two CRPF men sustained injuries, of which once succumbed on the way to the hospital late last night.

Click here to watch video
Inspector General of Police (IGP) Kashmir zone, Vijay Kumar said that a CRPF man, who had sustained injuries in the initial exchange of firing later succumbed. He said that killed militant was commander from ISJK. He identified him as Zahid Das, who was involved in a series of incidents including killing of police and CRPF men besides weapon snatching.
“He was also involved in the killing of a minor boy and a CRPF man at Bijbehara recently,” he said. He added that two ISJK militants and aides of Zahid were earlier killed and two more are still active.
Kumar told reporters on the sidelines of wreath laying ceremony of the martyred CRPF jawan that Srinagar district is not militancy-free as the militants keep on coming to the district for receiving funds and medical treatment.
“Srinagar can never be militancy-free as long as militancy is there. Militants keep on coming to the city for many purposes. At times they come for medical treatment, meeting with each other and sometimes to receive funds,” the IGP Kashmir said.
He said that there have been no militant attacks in Srinagar and recent encounters were due to proactive action of Police. “Let me clarify, there have been no militant attacks in Srinagar. All the three incidents were the outcome of proactive action of Police and the CRPF where leads were developed and militants hiding in city were tracked down and killed. Yesterday, also a lead was developed and when the suspected spot was zeroed in, the militant fired indiscriminately in which one CRPF jawan was hit who later succumbed,” the IGP said.
Asked about the 12 top commanders of Hizbul Mujahideen, Jaish-e-Mohammad and Lashkar-e-Toiba, who are on police radar including five from Hizb, three from Lashkar and four from Jaish, Kumar said: “We have already announced their names and they are being tracked down.”