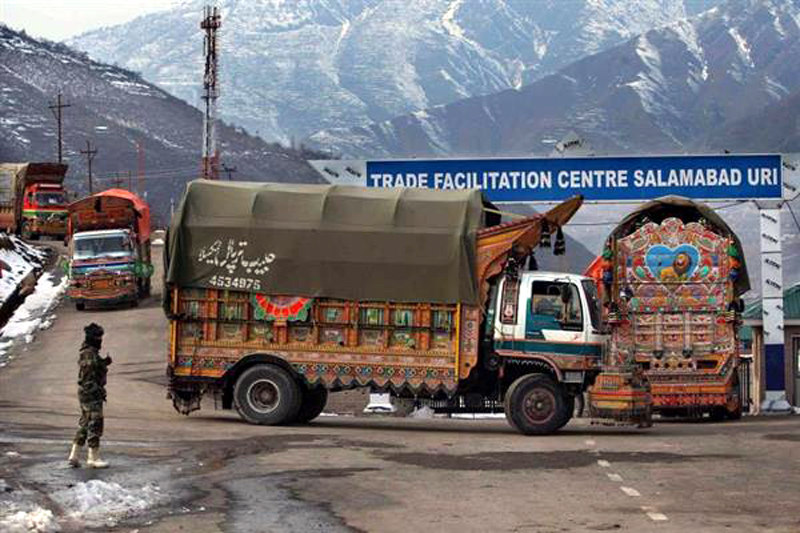 No trade from Poonch LoC since Apr 19

SRINAGAR/ POONCH: Sept 9: As the relations between India and Pakistan remained tense, the weekly Karvan-e-Aman bus and cross Line of Control (LoC) trade via Uri remained suspended since March 4 and between Poonch and Rawlakote route from April 19 this year.
Official sources said that there is no chance of early resumption of Karvan-e-Aman bus, operating between Srinagar and Muzaffarabad, capital of Pakistan-occupied-Kashmir (PoK), since the situation remained tense between the two nations.
Post scrapping of Articles 370 and 35A on August 5 by the Centre and frequent violation of 2003 ceasefire on the LoC and International Border (IB) by Pakistan troops, the tension between two neighbours has increased.
Only state subjects from both sides were eligible to travel in the bus, they said, adding that now, the state subject is no more valid/required after scrapping of Article 370, the fate of the service is uncertain.
On March 4, the bus service was suspended after a message was received from PoK that some repair work of Aman Setu, peace bridge at Kaman post, the last Indian military post at Uri was on. However, the bus service was not resumed, though no reason was later given.
Residents from both the sides who got stranded after the bus service was suspended on March 4 were allowed to cross LoC and return to their homes though no fresh guest from any side was allowed.
The bus service was introduced on April 7, 2005 to help families divided in 1947 due to partition to meet each other. India and Pak took this decision and agreed to allow travel of divided families on travel permits instead of International Passports.
The bus has helped thousands of divided families to meet each other. Despite opposition by the militants, almost all Separatist leaders, barring hard-line Hurriyat Conference (HC) chairman Syed Ali Shah Geelani and Democratic Freedom Party (DPF) chief Shabir Ahmad Shah, travel in the bus to PoK.
Sources further revealed that the trade between two sides via Chakkan-da-Bagh in Poonch was also suspended on April 19 this year. Since then, no further trade was conducted through Poonch. No specific reason was given for it while accounts of many traders are yet to be settled.
However, the bus service between Poonch and Rawlakote with some brief suspensions 2-3 times continued. Even the bus plied last Monday with just two passengers from PoK who returned to their homes after stay here in Poonch with their relatives. There was no Indian passenger from the either side during last Monday. Today again, the weekly bus remained suspended via Chakkan-Da-Bagh LoC point as there was no fresh traveller on the either side of the LoC.