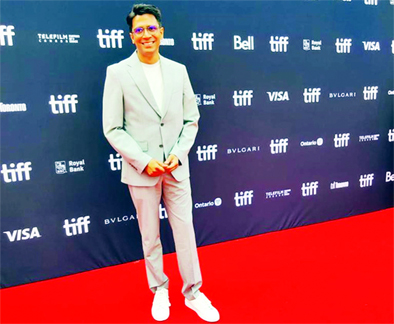 Kacchey Limbu, the debut feature film of director Shubham Yogi, is a coming-of-age sibling drama that follows a brother (played by Rajat Barmecha) and sister (Radhika Madan) navigating their family’s conditioning to find their own unique voice. The siblings in the film on competing cricket teams struggle to balance family and team loyalties. Asha Bajaj in conversation with the Yogi at the 47th Toronto International Film Festival (TIFF) after the film’s World Premiere
What is the significance of the title (Kacchey Limbu literally means unripe lemon) of your film?
In Mumbai, if somebody is learning something new and is an amateur that person is called a Kachha Limbu. Everybody in the movie who is starting out to do something new for the first time is Kachha Limbu.
Throw some light on the theme of the movie.
Finding your voice and learning how to assert it. It is very difficult for kids growing up in households that are dominated by their parents’ suggestions and advice.
This is not the first movie on women participating in sports. What motivated you to take on this theme?
Honestly, I did not think of it as a movie about women in sports. I was only writing a story about a girl who is not allowed to do certain things and was told instead to do other things. She had to muster courage and tell them that she is not going to do as she was told but would do what she desired. And that could have been through school or any other activity. Cricket was used in the film just as a tool.
How is your movie different from other movies with the same theme of sports?
The biggest difference between my movie and other movies about sports is seen in the end. The second difference is that here it is not about a professional sports team. It is like a coach class cricket, a gully cricket. The rules of cricket in the movie are invented by us and for us. When we watch the film we are not watching cricket. We would be watching only a version of cricket.
What have been your criteria for the selection of the characters in the film?
If I can imagine them looking like a character then you would be watching the character and not as a person. Secondly, I write with my actors and so I read with them and ask them to speak and if they feel they want to speak differently I would cooperate with that. So I like to give them the choice of what they think and we can then change and not do as they were told. These two things I used with them and all three of them who performed this were brilliant.
What were the challenges you met?
The first challenge that I met was that we were just five days away from shoots and Ayush (Mehra, one of the lead actors) and I got Covid and so we had to stop. The second time we were six days away from shoots and we had the second wave of Covid with us and everything was shut down. It was completely locked down. We had to set dates with a professional designer, photographer, etc and the dates were not available. Our biggest challenge was to manage dates and to get everybody there even after the lockdown had been lifted. Another big challenge was organizing everybody due to Covid 19 and keeping them safe. We are a big crew of 150 people and we had to keep them safe. That was our biggest challenge. Beyond that everything was fine.
Tell me a bit about your past films and your future projects.
I have done some short films including Uninvited (2018), Glitch (2019), Suno (2029), and Kaande Pohe (20). Kacchey Limbu is my first feature debut. Coming up next is a web series which will be released sometime in January of 2023. (TWF)