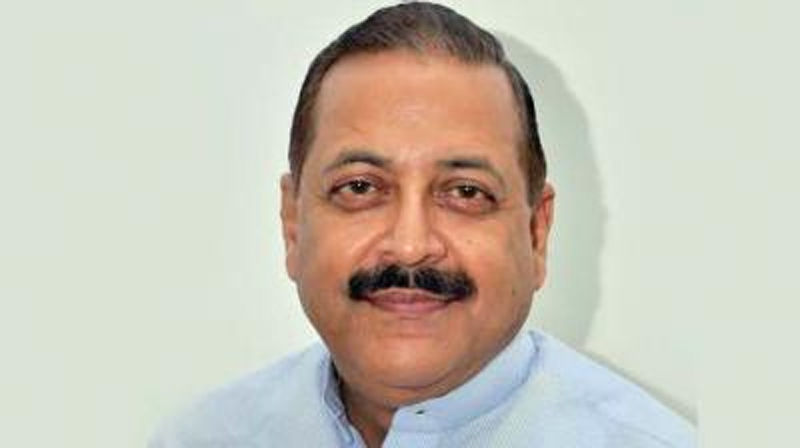 Avtar Bhat
JAMMU, July 14: Accusing successive Governments of breeding nepotism and corruption in erstwhile J&K State, Union Minister in PMO with independent charge of North Eastern States, Dr Jitendra Singh today said that there was no strong law in J&K to curb the menace of corruption and backdoor appointments.
He alleged that corruption and backdoor appointments flourished in J&K over the decades because of fragile laws.
Talking to Excelsior, the Union Minister said the laws were made by the erstwhile Governments in J&K for their convenience to get their own people adjusted in Government services while common and deserving people suffered for decades together.
Dr Jitendra Singh said that to suit their personnel ends and provide jobs to their own people on flimsy grounds and without outlining proper recruitment policy, the previous rulers framed Rehbar-e-Zirat, Rehbar-e- Taleem, Rehbar-e- Sehat from time to time.
This way the genuine and deserving youth were deprived of employment opportunities giving rise to corruption and malpractices. He said with new law in place after the J&K was converted into UT, the interview system was abolished in Government recruitments with the result the deserving and meritorious candidates will get their due right as there will be fair selection in the Government jobs.
Maintaining that there will be zero tolerance for corruption and terrorism under Narendra Modi Government, Dr Jitendra Singh said no backdoor appointments will be allowed in any Department henceforth and all appointments will be made through set rules and procedures framed by Government in this regard and total transparency will be maintained in the system.
Terming that a revolutionary change came into the country after Narendra Modi Government took over in 2014, the Union Minister said that this is the first Government which created a work culture in the country as well as politics.
He said there were incomplete laws in J&K and there was no jurisdiction to Central Vigilance Act or CBI which has been extended only after annulling of the Article 370. There was such a monopoly in the system that Ministers were making appointments on adhoc or temporary basis on their own. Neither there was transparency nor any foolproof system in the erstwhile State as highhandedness of rulers prevailed over the years as there was no strong law to check the same, he added.
Dr Jitendra Singh said this was because the erstwhile rulers in the J&K had no willingness that rule of law should prevail in the erstwhile State and this was the reason that over 800 Central laws which were framed from time to time since 1947 were not implemented in J&K. The Central Child Marriage Act and Dowry Act was not implemented in the J&K, besides, there were several other Central laws which too had no jurisdiction over J&K, he added.
Without naming any political party or leader, Dr Jitendra Singh said that those who were advocating for autonomy and self rule never allowed 73rd and 74th amendments of Indian Constitution to be implemented in J&K during their rule because they did not want that basic institutes of democracy should get strengthened and flourish in J&K. They were demanding autonomy and self rule for their own families and not for the people of Jammu and Kashmir who were exploited by some political families for their vested interests for decades together on catchy slogans, he added.
He said those exploited the people for decades together for their vested interests stand exposed now before the masses and added that the separatism in Kashmir is by convenience and not conviction.
Accusing these parties of depriving the West Pak refugees of citizenship rights for over seven decades, Dr Jitendra Singh said they were ignored on the basis of vote bank politics and Modi Government ended this decades old injustice.
Asserting that Modi Government has launched a decisive battle against terror, he said “We are committed to zero tolerance on terror and terrorism is in the last phase now”. While referring to latest killing of BJP leader and his father and brother in Bandipora in North Kashmir, he said the killing of innocent people are being made in desperation by terrorists but their days are numbered now. The erstwhile Doda district has been made free of terror, he added.
Maintaining that he is obsessed with Dogri language, Dr Jitendra Singh said the language can’t flourish unless those claiming to be its saviors will ask their children to speak in Dogri instead of English.
He said Dogri news bulletin from AIR was stopped for three months and no body who claiming to champion the cause of language talked about it. It was only when some youth activists of BJP brought the issue in his notice, he took it up with DG AIR and the news bulletin both in morning and evening were restored, he added.