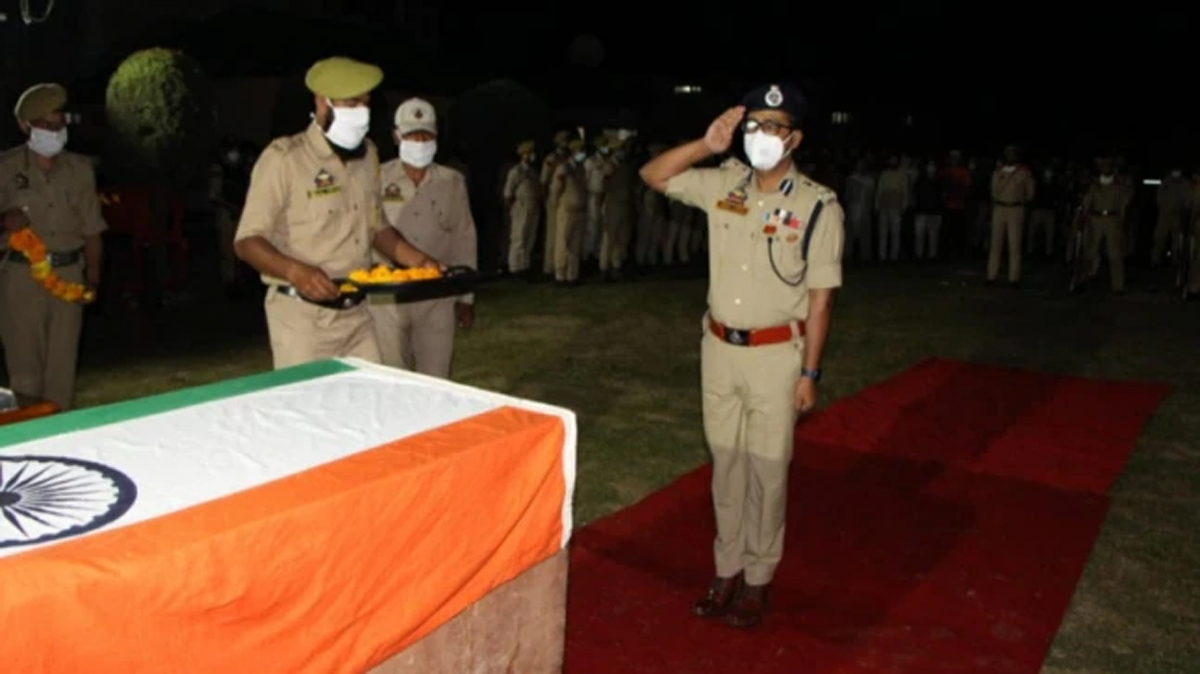 Jammu, Sept 17: A police constable was martyred and a non-local labourer killed in two separate militant attacks in South Kashmir district of Kulgam today.
Militants fired upon and critically wounded a police constable near Shamford School in Kulgam district this evening.
Click here to watch video
The injured police constable was shifted to the hospital. However, he succumbed to injuries on the way. The martyr cop was identified as Bantu Sharma, son of Trilokinath Sharma resident of Wanpoh who was working as Follower in J&K Police.
The security forces reached the spot and the area was cordoned off to nab the attackers
A police spokesman said that at 6 pm, Kulgam Police received information about an incident near Shamford School in Wanpoh area of Kulgam where militants had fired at a police man. “Senior police officers reached the spot”, he said.
“Preliminary investigation has revealed that militants had fired indiscriminately at the policeman Bantu Sharma son of Trilokinath Sharma resident of Wanpoh, Kulgam near Shamford School Wanpoh. In this incident, he had sustained grievous bullet injuries and was shifted to hospital for the treatment, where he succumbed,” the police spokesman said, adding that “police have registered a case in this regard under relevant Sections of law. Investigation is in progress and officers continue to work to establish the full circumstances of this crime. Area has been cordoned off and search in the area is going on.”
Inspector General of Police, Vijay Kumar, said that after the killing of top commanders, militants were frustrated and resorting to targeting of unarmed persons.
“Terrorists and their handlers in Pakistan are frustrated with recent elimination of top cmdrs of terrorists and peaceful environment even after death of separatist leader SAS Geelani. That’s why terrorists have killed one unarmed policeman ( PSI) recently and one unarmed policeman & one innocent outside labourer today in Kulgam district”, he said.
The Resistance Front (TRF) claimed responsibility for both the attacks. They said that the labourer was targeted for being a collaborator of security forces.
Several leaders including former Chief Ministers of J&K condemned the killing of policeman and expressed condolences to the bereaved family.
“I unequivocally condemn the militant attack in Kulgam district of South Kashmir. My heartfelt condolences to the family & colleagues of Constable Bantoo Sharma of Railway Protection Force who was killed in the line of duty earlier this evening. May his soul rest in peace,” tweeted Omar Abdullah.
PDP chief Mehbooba Mufti also tweeted: “Very sorry to hear about the attack in Kulgam today that claimed yet another innocent life. Deepest condolences & prayers with Bantoo Sharma ji’s family. May his soul rest in peace.”
Peoples Conference chief Sajad Lone wrote on his twitter handle, “Strongly condemn the killing of a policeman in Kulgam. May Allah give patience to the family of Bantu Sharma to bear this loss. And May the killers rot in hell.”
Militants also shot dead a labourer from Bihar, at Nehama area of Kulgam district.
Police said that a non-J&K labourer was shot at by militants at around 8:25 pm at Nehama area. The slain was identified as Shankar Choudhary, a resident of Bihar.
Top security officials rushed to the spot and that the area has been sealed while a manhunt has been launched to nab the attackers.