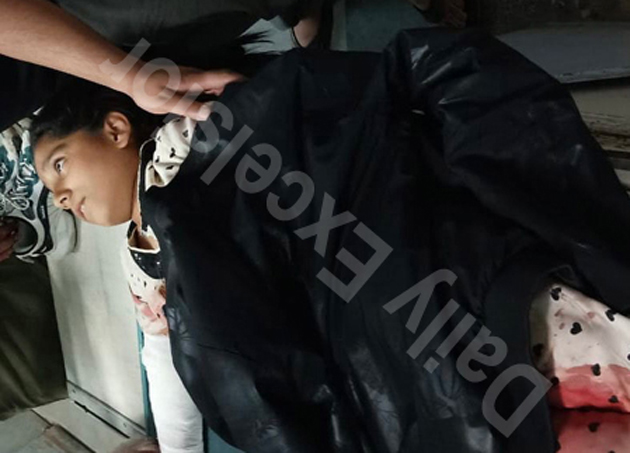 Excelsior Correspondent
Jammu, May 24: A police man was martyred and his daughter injured in a militant attack in Soura area of Srinagar today while a militant module was busted in Awantipora and eight militant associates were arrested.

Click here to watch video
A police spokesman said that militants this evening fired indiscriminately upon a police personnel Saifullah Qadri son of Mohammad Syed Qadri, resident of Ganai Mohalla Anchar outside his house.
He said that his 9-year-old daughter received critical gunshot injuries in the attack and was evacuated to a nearby hospital for treatment. Saifullah Qadri who was also injured in the attack succumbed to his injuries.
A massive search operation was launched against the militants responsible for the killing of the cop. Police has registered a case and initiated investigation.
Inspector General of Police (IGP) Kashmir, Vijay Kumar, today said that militants showed most inhuman face by killing the unarmed policeman and injuring his minor daughter. He was quick to add that police will soon identity the militants involved in the act and neutralize them.
Speaking to reporters on the sidelines of the wreath laying ceremony of martyred cop, the IGP said that the militants have shown the most inhuman face by attacking Saifullah who was taking his minor daughter to hospital for treatment.
“In the incident, we lost the policeman who was unarmed. What was the fault of his daughter who suffered injuries and is being treated at the hospital?”, he asked.
He said that police will soon identify the attackers and kill them. He said that militants have been attacking the unarmed policemen who are on leave. “The families of militants should also condemn today’s act in which the minor girl of the policeman was injured,” he said.

The wreath laying ceremony was held at District Police Lines, Srinagar and was attended by DIG CKR Srinagar Sujit Kumar, DIG CRPF Mathew A John, DC Srinagar Mohammad Aijaz Asad, SSP Srinagar Rakesh Balwal, SP PC Srinagar, all Zonal SSPs and other officers.
In the meantime, security forces today busted a militant module of Jaish-e-Muhammad (JeM) in Awantipora area of Pulwama district by arresting eight militant associates.
The spokesman said that based on specific input, several suspects were arrested and further leads were developed that led police and security forces to bust a module of Jaish-e-Mohammad operating in Awantipora.
Eight arrested militant associates have been identified as Mushtaq Ahmad Dar son of Bashir Ahmad Dar, Ishfaq Ahmad Dar son of Abdul Rasheed Dar, Manzoor Ahmad Dar son of Bashir Ahmad Dar, all residents of Wagad, Fayaz Ahmad Rather son of Muhammad Rajab Rather, resident of Pastuna, Shabir Ahmad Rather son of Sanaullah Rather, resident of Syedabad Pastuna, Muhammad Latief Rather son of Asadullah Rather, resident of Syedabad Pastuna, Sheeraz Ahmad Mir son of Ghulam Mohammad Mir resident of Aripal and Waseem Ahmad Bhat son of Ab Gani Bhat, resident of Pastuna.
“Incriminating materials including ammunition were also recovered from their possession. Besides, vehicle used in the commission of the crime has also been seized,” police said.
Preliminary investigation revealed that the arrested militant associates were involved in providing shelter, logistics and transportation of arms/ammunition to two active militants of JeM Asif Sheikh, resident of Monghama and Ajaz Bhat, resident of Syedabad Pastuna Tral.
A case (FIR number 75/2022 under relevant sections of law) has been registered at Police Station Tral and further investigation is in progress.
In Kulgam district, two civilians were injured in a grenade attack on a naka party of police and CRPF at Yaripora this evening.
Militants hurled a grenade and also fired upon a naka party of CRPF and Police in Yaripora. However, it missed the target and exploded away from them.
He said that in the incident, two civilians received injuries, who have been shifted to hospital, where their condition is said to be stable.
He added that the area has been cordoned off to nab the attackers.