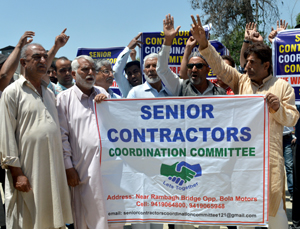 SRINAGAR, June 2: Senior Contractors Coordination Committee held a protest demonstration today against the Government’s failure to release their bills which are pending with various departments.
Scores of contractors who assembled at Press Enclave here raised slogans against the Government and demanded clearance of bills which they claimed were pending with the Government.
The protesting contractors alleged that the bills have been pending with various departments of the Government since 2014.
Bashir Ahmad Khan, Chairman, Senior Contractors Coordination Committee said that the protest is being organized today against failure of Government in clearing pending bills of the contractors.
“We think there is no proper policy of the Government in expediting the developmental works of the State as they are least bothered about clearing the bills of the contractors which are pending since 2014. The contractors are being deprived of their livelihood and compelled to spend money from their own pockets on the developmental projects,” he said
He said the work on most of the projects has been stopped due to paucity of funds. “Government claims that the Centre had approved funds worth crores for the developmental works in the State, where are those funds,” he questioned
The protesters demanded that the pending liabilities of the contractors should be cleared at an earliest so that they will have a sigh of relief.