E-Paper
Home Todays story Contest left to 4 candidates like 2014, all others opt out of... 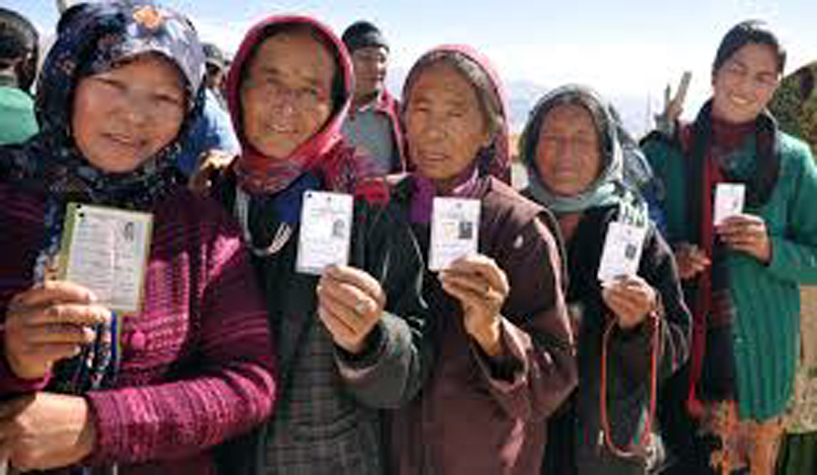 PM to address election rally in Leh
Last minute bid to evolve consensus in Kargil fails
Sanjeev Pargal
JAMMU, Apr 22: In a repeat of 2014 general election like situation, only four candidates have been left in the fray—two each from Leh and Kargil districts as three other Independents opted out of the race on last day of withdrawal of nomination papers for Ladakh seat today.
The contest now will be among Jamyang Tsering Namgayal (BJP), who is Chairman-cum-Chief Executive Councilor of Ladakh Autonomous Hill Development Council (LAHDC), Leh, Rigzin Spalbar (Congress), Haji Asgar Ali Karbalaie (Independent), who was Congress MLA from Kargil in the last Assembly and Sajjad Kargili, a journalist-turned-politician.
In 2014 general elections too, there were only four candidates in the fray including two each from Leh and Kargil districts, affiliated with same political parties and religious organizations.
In 2014, the fight was among Thupstan Chhewang (BJP), Tsering Samphel (Congress), both from Leh district, Ghulam Raza, a prominent Congress leader, who had joined the fray as an Independent candidate backed by Imam Khomeini Memorial Trust (IKMT) and Syed Mohammad Qazmi, another Independent supported by Islamiya School Kargil (ISK).
This time, Raza has been replaced by Karbalaie as IKMT backed candidate and Sajjad Kargili is the ISK, National Conference and PDP nominee supported by the ISK in place of Qazmi.
Political observers told the Excelsior that battle lines have once again been drawn between Leh and Kargil districts, which formed part of Ladakh Parliamentary seat. While in Buddhist-dominated Leh, the fight would be directly between BJP and Congress candidates, in Muslim-dominated Kargil, the contest is mainly between Karbalaie and Sajjad Kargili.
All other three Independent candidates opted out of the contest today and withdrew their nomination papers on last day of withdrawals. They included Kacho Mohammad Feroz and Asgar Ali from Kargil district and Tsering Namgayal from Leh district. A total of eight candidates had filed their nomination papers for Ladakh. While one nomination paper was rejected, three candidates withdrew their papers, leaving only four in the fray.
Earlier, an attempt was made by some religious, social and political organizations to field consensus candidate from Kargil.
Sources said some of the representatives of religious, social and political organizations made last minute attempt to evolve consensus and field one candidate from Kargil to wrest the seat from Leh. However, the consensus remained elusive as both sides were adamant that their candidate would contest and the other one should withdraw.
The talks were called off later.
Meanwhile, Congress hasn’t initiated any action so far against Haji Asgar Ali Karbalaie, who has revolted against the party and joined the electoral battle as an Independent candidate against party’s official nominee, Rigzin Spalbar. Sources said the Congress was waiting for Karbalaie to withdraw his nomination papers on last day to do so today but since he stayed in the fray, he could be expelled from the party.
Karbalaie had served as Chairman-Cum-Chief Executive Council (CEC) of Ladakh Autonomous Hill Development Council (LAHDC), Kargil as well as MLA Kargil in the last Assembly on Congress mandate.
Going by the tough contest in 2014 when BJP leader Thupstan Chhewang had won the seat with just 36 votes, sources said all political parties and religious organizations have put their weight behind their nominees to help them win the battle of ballots. Ladakh will go to polls in fifth phase on May 6. Congress rebel and IKMT-backed Independent candidate, Ghulam Raza was the second behind Chhewang in 2014.
Chhewang had polled 31,11 votes followed by Ghulam Ahmed Raza, who got 31,075, Syed Mohammad Qazim 28,234 and Tsering Samphel (Congress) 26,402.
In 2009, Ghulam Hassan Commander, an Independent candidate from Kargil district had won Ladakh seat.
The division between Leh and Kargil districts is quite visible once again.
In February this year when the Governor’s administration granted divisional headquarters to Ladakh, thus, conceding a long pending demand of the region, Kargil had united and resorted to massive protests demanding rotational divisional headquarters between Leh and Kargil as the administration had fixed the headquarters at Leh. The protests had forced the authorities to rotate the divisional headquarters between the two districts.
BJP candidate and LAHDC Leh Chairman-cum-CEC Jamyang Tsering Namgayal is relying heavily on the support of people following divisional status and University granted to Ladakh besides increasing powers of the Councils and other developmental works during the Central rule in the State while the Congress is trying to cash what it called “anti-incumbency factor’’ against the BJP and promising development of Ladakh.
Karbalaie and Sajjad Kargili were set to harp on the issues of Kargil district and support of IKMT and ISK respectively besides other groups.
Meanwhile, BJP leaders said, Prime Minister, Narendra Modi is likely to campaign for the BJP candidate Jamyang Tsering Namgayal in first week of May. Exact date for the Prime Minister’s visit is being finalized.
Union Minister of State in the Prime Minister’s Office (PMO), Dr Jitendra Singh, BJP State president, Ravinder Raina, All Morchas Incharge, Munish Sharma and BJYM State general secretary, Arjan Dev Singh today reached Leh for campaign in Ladakh Lok Sabha seat.
Raina, who will campaign in Ladakh till the end of campaigning, said Minister of State for Home, Kiren Rijiju will campaign in Leh on April 27 while BJP general secretary, Incharge Jammu and Kashmir, Ram Madhav will reach Leh on April 28 for campaigning in Leh and Kargil.