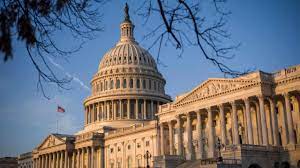 Washington, May 13: Over a dozen influential Congressmen attended the formal launch of the nationwide “Azadi Ka Amrit Mahotsav” event by Indian Americans to celebrate the 75th anniversary of India’s independence, a remarkable achievement of the world’s largest democracy.
Coinciding with the Asian Heritage Month, the event attracted several hundreds Indian Americans from various parts of the region, wherein they announced measures and festivities across the country to celebrate the momentous occasion of 75th anniversary of India’s independence.
Congressman Raja Krishnamoorthi called on the community leaders to help elect other Indian Americans to the US Congress and other elected bodies as well.
“If you do not have a seat at the table, you are on the menu,” he said.
Over a dozen and a half eminent lawmakers attended the event held at the US Capitol organised by the Federation of Indian Associations of New York, New Jersey and New England. Prominent among them included Congressman Frank Pallone and Congresswoman Sheila Jackson Lee.
FIA is planning a major festivity in New York around Independence Day, including flag hoisting at the Times Square, said Ankur Vaidya from the federation.
“Today was a historical moment for Indian Americans to celebrate the 75th anniversary of India’s Independence Day at the US Capitol,” said Kenny Desai, FIA president. FIA is one of the oldest and largest non-profit grass-root umbrella organisations of Indian Americans.
“It was a great celebration of Azadi ka Amrit Mahotsav in the presence of US Congressmen. FIA’s community services have been recognised by Congressional Record,” said Srujal Parikh, FIA secretary.
Alok Kumar, former president of FIA and the chairman of Bihar Foundation USA, said the event was inspired by the call given by Prime Minister Narendra Modi to celebrate the momentous occasion across the world. (PTI)