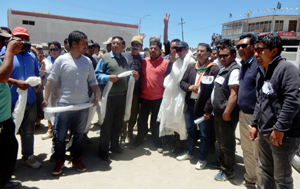 LEH, June 7: The Congress today delivered a major blow to the BJP by wresting Thiksay Councilor seat of Ladakh Autonomous Hill Development Council (LAHDC), Leh, the by-election for which was held on June 4 due to the demise of BJP Councilor and then Chairman of the Council, Dr Sonam Dawa Lonpo.
Congress candidate Tundup Gyatso polled 1163 votes and defeated BJP nominee Stanzin Chospel by 109 votes. Chospel got 1054 votes.
Stanzin Phuntsog of National Conference got 242 while Independent Zahoor-ul-Hassan polled 249 votes.
Counting commenced this morning at Indoor Stadium, Leh. Deputy Commissioner, Leh, Avny Lavasa and Additional DC Moses Kunzang were present during the counting.
A total of 64 per cent electorates had cast their votes during the polling held on June 4. Lonpo had passed away on January 29.
PCC (I) president GA Mir and DCC Leh president Tsering Samphel have expressed jubilation over the Congress victory. Samphel pointed out that Congress has never won Thiksay seat in the past and, therefore, it was a new beginning for the party.
BJP candidate Stanzin Chospel also extended congratulations to the Congress candidate. He said internal politics over the mandate was one of the reasons for his defeat.
DC Avny Lavasa said the election and counting process went off peacefully.