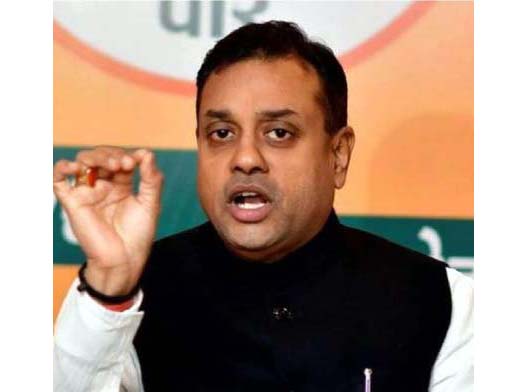 RAIPUR, July 26: BJP national spokesperson Sambit Patra on Tuesday claimed the Congress thinks it is entitled to indulge in “dacoity” and no one should question it.
He slammed the Congress for its ‘satyagrah’ against the questioning of party president Sonia Gandhi by the Enforcement Directorate (ED) in a money laundering case linked to the National Herald newspaper.
Patra said the Congress had written to its state chiefs and leaders to stage the ‘satyagrah’ protest at the statues of Mahatma Gandhi, the Father of the Nation, who undertook a ‘satyagrah’ during the country’s struggle for independence from the British rule.
“See the height of their hypocrisy and double-standards that those who encouraged corruption will stage the so called satyagrah at the Father of the Nation’s statue. They will malign Bapu’s name. If Mahatma Gandhi is watching from somewhere, he would be thinking the decision to dissolve the Congress was very correct,” the BJP leader claimed.
Sonia Gandhi on Tuesday appeared before the ED in Delhi for her second round of questioning in the case.
Her son Rahul Gandhi and several party MPs were detained by police in the national capital after they staged a protest against the ED questioning of the Congress president.
Addressing a press conference at Kushabhau Thakre Parisar, the BJP office in Chhattisgarh capital Raipur, Patra said, “I feel many times that for the Congress, the meaning of ED was ‘entitlement for dacoity’. They thought they were entitled to indulge in dacoity and no one should question them.”
Those who are corrupt should not think that they will not be investigated, he said.
“Zero tolerance against corruption has been the BJP’s motto. The way the Congress party has been doing a drama of satyagrah against Sonia Gandhi’s appearance before the ED in the National Herald case today, the whole country is watching it,” he said.
The opposition is left with no issues to raise, Patra said.
“The Congress has been spreading commotion, disrupting traffic and indulging in brawl in the name of satyagrah. Sonia ji we want confession, not commotion. The country wants a confession on how Rs 5,000 crore was embezzled and who were behind the conspiracy,” he said.
He said an investigation is a due process. The process of law of the land will take its due course and come to a logical conclusion. “This is the beauty of India,” he added.
Patra claimed that “cash to the tune of Rs 21 crore was seized from West Bengal minister Partha Chatterjee, cash was recovered from sitting Aam Aadmi Party minister (in Delhi) Satyendra Jain, and court has made strong observations in the National Herald case wherein Rs 5,000 crore was embezzled”.
So, the BJP asks the country that should an investigation not be carried out in these cases? he said.
“Should we leave these issues because the opposition does not like an investigation into it? Should the investigation be stopped only because of their sense of entitlement?” the BJP leader asked.
When there are charges of corruption worth Rs 5,000 crore against Congress leaders Sonia Gandhi and Rahul Gandhi, then naturally they will be questioned, he said.
The property which was embezzled belonged to taxpayers and freedom fighters who sacrificed their lives, and one family snatched it, he claimed, adding that those responsible (for the offence) have to face questioning.
Patra further said the opposition parties were running out of issues.
This could be gauged from the fact that Leader of Opposition in the Rajya Sabha Mallikarjun Kharge and other Congress MPs complained in writing about sitting arrangement of the LoP in the Upper House of Parliament during the oath ceremony of President Droupadi Murmu on Monday, Patra said.
He also claimed that Aam Aadmi Party and Congress leaders circulated a “morphed video” featuring Prime Minister Narendra Modi and former President Ram Nath Kovind, and said this was unfortunate. (PTI)