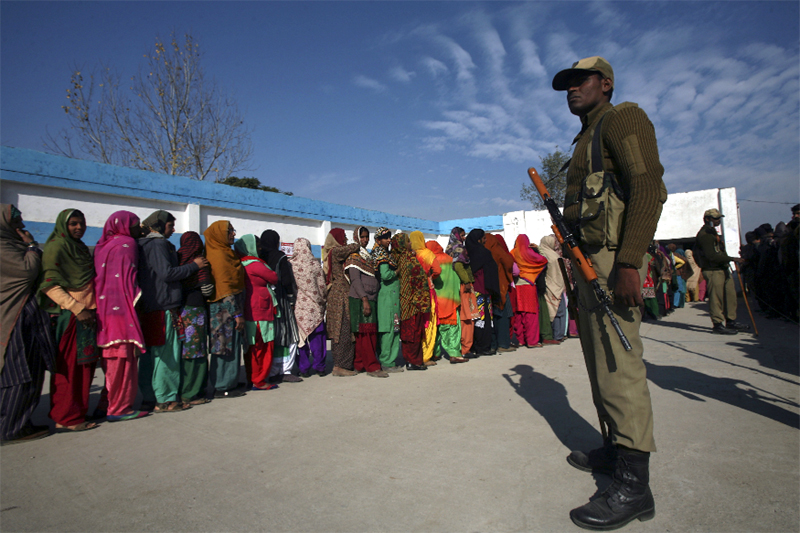 Gopal Sharma
JAMMU, Oct 8: The Congress Party is likely to withdraw from the contest in the Block Development Committee (BDC) elections in Jammu and Kashmir.
While National Conference has already dropped enough hint not to contest elections in view of detention of its many leaders in Kashmir, the PDP has maintained silence over the matter, showing no interest in the unilateral decision of the ruling dispensation at the Centre about elections. Moreover, tomorrow is the last date of filing nominations up to 2 pm.
Two senior PCC leaders told the Excelsior that tomorrow (Oct 9) is the last date of filing nominations for the post of Chairman of the Block Development Councils. But till today, many Congress leaders are under detention in Kashmir. While Panchayat elections were held on non-party basis, the BDC elections have been declared on the party basis.
They revealed that all the BJP leaders and activists are moving free and carrying on their political activities and campaign, many leaders of not only Congress Party, but those from the main regional parties like- NC and PDP are still kept under restrictions/detention. The security of many leaders has been withdrawn and movement of the party leaders has been restricted. Under such circumstances, it is not possible to contest elections for them.
They pointed out that BJP has worked out the selection process of contesting candidates from Block, to District and State levels and declared lists but the Congress leadership was not given time to work on this exercise, due to restrictions. “This is basically the mockery of democracy. Let the BJP contest elections itself as it is hell bent to grab power by adopting any means, eroding sanctity of the democratic institutions,” they regretted.
The party sources said that PCC president GA Mir, who is constantly in touch with the Party high command in Delhi, will hold a crucial meeting of the senior party leaders including district (DCC) presidents at 10 am in Jammu tomorrow. After review of earlier decision, declared on October 4 (Friday) regarding contesting of elections, may be reversed. The PCC chief may declare his decision after this crucial Congress Party meeting, the sources added.
Meanwhile, JKPCC chief spokesperson, Ravinder Sharma has said that Congress is taking review of the overall scenario with regard to BDC elections in the wake of continued restrictions on the majority of senior Congress leaders in entire Kashmir valley.
In a statement here this evening, Sharma said that the PCC president is in touch with the top functionaries and senior leaders of the party, especially on communication in Kashmir valley to take stock of the situation with regard to ongoing elections of BDCs despite party’s strong reservations about the conduciveness of overall situation in the State.
He said that still there is total non-cooperation from the Government even after Congress party’s willingness to participate in the elections announced unilateral by the Government on ‘party basis’. The party is taking a ‘fresh review’ of the entire situation and getting feedback from the different quarters especially from Kashmir Valley after the announcement of BDC elections.
PCC chief spokesperson on Friday had declared that despite strong reservations about the unilateral decision to hold elections that too on ‘party basis’ by keeping entire opposition leaders under detentions and restrictions for around two months, the political and security environment not being conducive, heavy odds of security, other restrictions, lack of communication, restrictions on leadership in Kashmir valley and without extending the left out provisions of the 73rd amendment in the new Constitutional arrangement and in the wake of 12052 seats in Panchayats in Valley keeping vacant, the Congress had taken the bold decision to take part in this election in the larger interest of the democracy, people of the State and the nation.
He mentioned that despite heavy odds and hurdles being faced by the opposition due to Government policy, the Congress party had decided to give tough fight to BJP. He said even State president GA Mir was not provided routine security. So far, he has permission to move in and around Jammu only. Congress leaders have bigger issues of lack of adequate security as compared to ruling party besides other odds.
“This shall be the first elections, where against all odds of the security situation the Government rather than facilitating and encouraging opposition to ensure greater participation is not creating conducive atmosphere for them. Congress has never shirked any elections in the past, despite all odds and participated in Panchayat elections,” the chief spokesperson revealed.