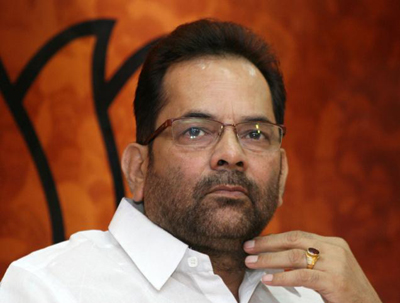 LUCKNOW: Union minister Mukhtar Abbas Naqvi said today that the Congress was a “history-sheeter” in throttling democratic values and constitutional norms and had been unable to shed its “dictatorial” mentality.
Naqvi made the remarks at a programme organised here to mark a “Black Day” on the 43rd anniversary of the Emergency.
“The Congress is a history-sheeter in throttling democratic and constitutional norms. It believes in the undemocratic mentality of Emergency,” he said.
The “killing and oppression of thousands” of people was the truth of the Emergency which shook the soul of India’s democratic values, he said.
“The Congress has failed to overcome the same feudal mentality and motive,” he added.
Naqvi said the Centre’s decision to include, in detail, chapters on the Emergency in textbooks was a welcome step as there was a need to tell people about the atrocities committed during the period when “the soul of democracy and the Constitution was destroyed”.
“The majority of people, especially the youth, doesn’t know that the Emergency was imposed by the Congress to protect its power and throne.
“The way we are told about our freedom struggle in detail, the same way we should be told about the Emergency in our textbooks. This will make people, especially the younger generation, aware of the sacrifices made by pro-democracy activists,” he said.
The Congress governments that were formed after the Emergency, too, worked with a “feudal mindset”, he said and added that instead of learning lessons, the party repeated its “sin”.
“There is no change in their mentality even today when they are in the Opposition,” he added.
Alleging that the Congress “misused” even the sensitive issue of national security for its narrow political self-interests, he said that a “Congress-free India” means making the country free from the feudal mindset and autocratic thinking. (AGENCIES)