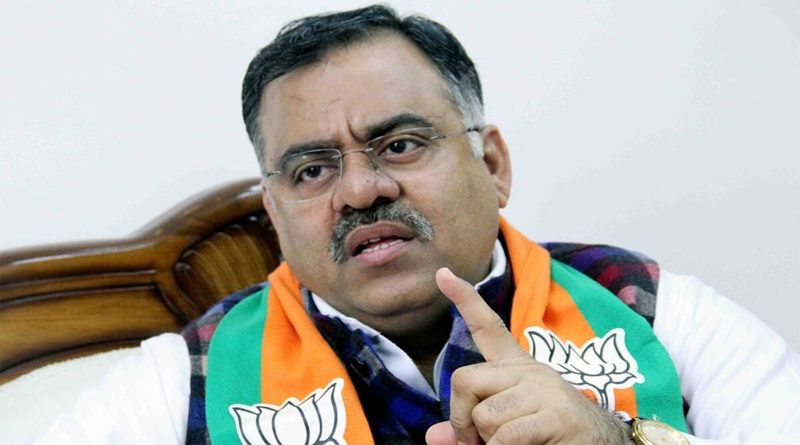 ‘Party exposed for its double standards’

Avtar Bhat
JAMMU, July 28: Lambasting Congress party, BJP national general secretary, Tarun Chugh today accused the party of having a covert agenda of supporting terrorism in the country.
Chug, who was on a three -days tour of Ladakh UT to participate in Vijay Diwas celebrations at Drass, Kargil while talking to reporters on his return to Chandigarh today said that Congress has a hidden agenda of supporting terrorism in the country.
He said to fulfill its agenda, the party left no stone unturned and in this regard it came openly in support of the Kanaihiya Kumar of the ‘Tukde Tukde Gang’ and other such forces who tried to pose threat to national unity and integrity.
He said it is pity that Congress party to fulfill its pro terrorist agenda even raised fingers on security forces on their anti terrorist operations which is totally unfortunate.
Chug, who took Congress vice president, Rahul Gandhi to task blamed him of joining hands with the Afzal Guru supporters’ and Tukde Tukde Gang on the one hand and on the other hand he talks about internal security of J&K.
The BJP leader said this shows the double standards of the Congress party for which it has been exposed among the people of the country as it always after grabbing power by hook or crook was never bothered about the larger interests of the nation.
Chugh said the way the Congress MPs expressed their opposition to the Unlawful Activities ( Prevention)  Bill, 2019 and staged a walk-out in the Lok Sabha clearly demonstrated that the Congress would defy any action that the Centre would take against anti-national forces.
Chugh said the Bill amends the Unlawful Activities (Prevention) Act, 1967, providing special procedures to deal with terrorist activities and individuals and groups that foster terrorism in India. He said he failed to understand why Congress president Sonia Gandhi was opposed to any anti-terror action taken by the Centre.
“Is she hand-in-glove with terrorists or is she trying to lend them support to encourage subversive activities in the country”?, Chugh asked.
Chugh suggested the Congress to adopt a national perspective in addressing terrorist activities instead of indulging in its parochial and short-sighted politics. He said it was time the Congress gets into serious introspection. “Else the party would be decimated in the country sooner than expected”, he added.
He said country fails to understand why Sonia Gandhi is opposing any Government action taken to curb terrorist activities in the country.
Chug said it was Congress which repelled the Prevention of Terrorism Act (POTA ) promulgated by Vajpayee Government to weed out terrorism from the country. The Congress party showed a soft corner towards the disruptive forces that soon coming to power the first work which it did under Manmohan Singh Government was repelling of this Act to please the disruptive and anti national forces.
Chug said the Congress was responsible for Kashmir situation as it always nurtured the forces inimical to national interests in the Valley of Kashmir who discriminated with the other regions of the erstwhile State.
He said Congress never worked to strengthen the grassroot democracy in J&K and hold the four –tier elections to the basic institutes of democracy. Even it hobnobbed with the National Conference (NC) for years together since 1952 when the nominations of all candidates of Praja Parishad were rejected to give absolute power to Sheikh Mohammed Abdullah.
Chug said it was Congress which brought the controversial Article 370 in the Indian Constitution to please Sheikh Mohammed Abdullah. This Article which had given a separate status to J&K was root cause of breeding separatist tendencies in some sections of people in Kashmir valley, he added.
The BJP leader said BJP Government led by Narendra Modi did a great justice with the people of J&K after annulling Articles 370 and 35-A of Indian Constitution on August 5, 2019 and this way the party fulfilled a promise made with the people by its founder president, Dr Shyama Prasad Mookerjee who had also laid down his life against the grant of special status to J&K which was done against the wishes of the people of entire nation.