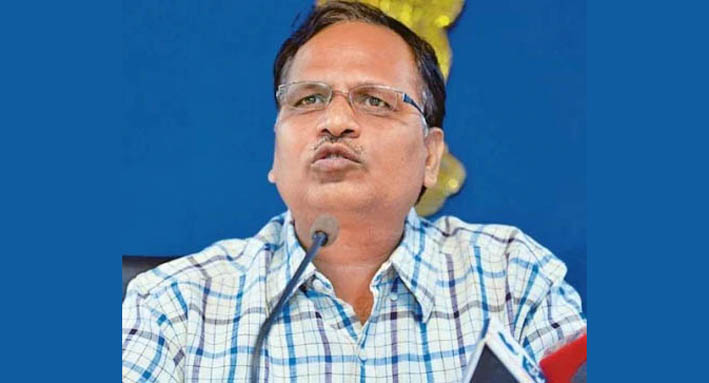 NEW DELHI, July 21:
Delhi Health Minister Satyendar Jain on Wednesday said there have been many deaths due to oxygen shortage in Delhi and other places across the country and it was “completely false” to say no one died for want of the life-saving gas.
“If no deaths occurred due to oxygen shortage, why did hospitals move high court one after another every day? Hospitals had been saying that oxygen shortage led to deaths. The media, too, flagged this issue daily,” Jain told reporters here.
“Television channels and newspapers reported how hospitals ran out of oxygen. It is completely false ad wrong to say that no one died due to oxygen shortage,” he said.
“There have been many deaths due to oxygen shortage in Delhi and many other places across the country. It was really sad and unfortunate,” Jain said.
The minister said the Centre did not ask for data related to such deaths but the city government had tried ascertaining the number on its own by setting up the panel.
“The Delhi government had set up a committee to collect data on such deaths and give Rs 5 lakh compensation to the families of the deceased. But the Centre got the panel disbanded through the Lieutenant Governor,” he alleged.
“Else, we would have got the exact data as to how many people died due to oxygen shortage in Delhi… I think the Centre disbanded the panel so that they could say no one died due to oxygen crisis,” the minister said.
“The Centre is rubbing salts into the wounds of those who have lost their loved ones… Tomorrow, they will say there have been no deaths due to COVID-19,” he added.
Delhi battled an acute shortage of oxygen for around two weeks in April and May, as hospitals in the capital sent out desperate SOS calls to authorities to replenish their dwindling stocks. Several private healthcare facilities even requested the government to shift out their patients.
On April 23, around 20 critically-ill COVID-19 patients had died at Jaipur Golden Hospital in northwest Delhi due to oxygen shortage.
Batra Hospital in Tughlakabad Institutional Area lost eight lives due to oxygen shortage on May 1.
The central government on Tuesday informed the Rajya Sabha that no deaths due to lack of oxygen were specifically reported by states and UTs during the second COVID-19 wave. But there was an unprecedented surge in demand for medical oxygen during the second wave and it peaked at nearly 9,000 MT compared to 3,095 MT in the first wave following which the Centre had to step in to facilitate equitable distribution among the states, it said.In a statement issued on Tuesday, Delhi Deputy Chief Minister Manish Sisodia said there was a shortage of medical oxygen during the peak of the COVID-19 second wave.
“The central government has been running a cover-up since the very start of the pandemic. It is because of their flawed policy and implementation that the country had to endure an oxygen crisis during the toughest phase of the pandemic,” he had said.
The Delhi government “wanted to account for the reason behind deaths” during the pandemic, and had constituted a ‘Death Audit Committee’ to work towards that end, Sisodia said.
The central government, however, did not want their “fallacies to be unveiled so they did not let us go through with the committee as they knew what truth will come out in the open”, he alleged. (PTI)