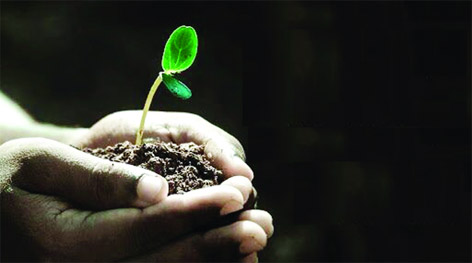 Dr. Parveen Kumar
‘Desertification’ refers to ‘the process of persistent degradation of dry land ecosystems by climatic variations and human activities. Desertification occurs as a result of a long-term failure to balance human demand for ecosystem services and the amount the ecosystem can supply. As a result of desertification, fertile areas become increasingly arid the biological productivity is lost. It is in other words, the spread of arid areas caused by a variety of factors, such as climate change (particularly the current global warming) and overexploitation of soil as a result of human activity.
If we trace the geological history, we find that the development of deserts have occurred naturally. In recent times, the potential influences of human activity, improper land management, deforestation and climate change on desertification has become the subject of many scientific investigations. As recently as 2005, considerable controversy existed over the proper definition of the term ‘desertification.’ Helmut Geist (2005) identified more than 100 formal definitions of desertification. The most widely accepted of these was that of the Princeton University Dictionary which defined it as ‘the process of fertile land transforming into desert typically as a result of deforestation, drought or improper/inappropriate agriculture’. Desertification and Drought have a bearing on each other. With less vegetation there is less transpiration and evaporation from the soil, causing less rainfall which ultimately leads to Drought like situation. Drought triggers the desertification and also the desertification can influence the drought by reducing the water soil content.

World Day against Desertification and Drought

No matter where we live, the consequences of desertification and drought concern all of us. According to the UNCCD (UN Convention to Combat Desertification), 25% of the world’s land area is either highly degraded or undergoing high rates of degradation and is no longer productive. 75 per cent has been transformed from its natural state, mostly for agriculture. This transformation in land use is happening at a faster rate than at any other time in human history, and has accelerated over the last 50 years. Scientists say the evolution from one state to the next is so rapid and the process is only observable over very short periods. Everyone needs to know that desertification, land degradation and drought (DLDD) have direct affect on their daily lives, and that everyone’s daily actions can either contribute to, or help fight DLDD. To prevent further degradation and to restore the degraded soil by creating awareness and promoting practices which does not lead to desertification and drought, ‘World Desertification and Drought Day’ is celebrated every year on June 17 all across the globe.
HISTORY OF WDDD: This day was proclaimed by the United Nations General Assembly resolution A/RES/49/115 on January 30, 1995, after the day when United Nations Convention to Combat Desertification was drafted. The major objective for this day was to promote public awareness of the issue, to let people know that desertification and drought can be effectively tackled, that solutions are possible, and that key tools to this aim lay in strengthened community participation and cooperation at all levels and to strengthen implementation of the United Nations Convention to Combat Desertification in those countries experiencing serious drought and/or desertification, particularly in Africa.
THEME: Avoiding, slowing and reversing the loss of productive land and natural ecosystems now are both urgent and important for guaranteeing the long-term survival of planet earth and for the people living on the planet. Keeping in mind the different factors that contribute to the reversal of desertification and drought, The ‘World Desertification and Drought Day’ is celebrated every year with a specific theme. This year the day is celebrated with the theme ‘Land restoration can contribute greatly to post-COVID19 economic recovery’. Investing in land restoration creates jobs and generates economic benefits, and could provide livelihoods at a time when hundreds of millions of jobs are being lost.
IMPORTANCE OF THE DAY: The importance of celebrating this day can be gauged from the fact that about 99 per cent of the calories every human being needs for a healthy life still come from the land. Land that is healthy and resilient is the first point of defense against disasters such as droughts and flashfloods, which are becoming more frequent, long and severe. The loss of more and more productive land is thus a concern for all of us. Given the speed with which the process is going on, the next few decades will be the most critical in restoring land for sustainable future. The problem is man-made, which means humans are also part of the solution. Thus, sustainable land management should be everyone’s business. Together, we can restore the productivity of over 2 billion hectares of degraded land and improve the livelihoods of more than 1.3 billion Peoples around the world. Land degradation, climate change and biodiversity loss is intimately connected and is increasingly affecting human well-being. Tackling these issues together is also a key to achieving many of the Sustainable Development Goals (SDGs). A decade of land degradation may create irreversible damage, but a decade of land restoration may bring multiple benefits. If countries can restore the nearly 800 million hectares of degraded land they have pledged to restore by 2030, we can safeguard humanity and our planet from the looming danger, according to I. Thiaw, Executive director UNCCD’
The 2021 Desertification and Drought Day to be held on 17 June will focus on turning degraded land into healthy land. Restoring degraded land brings economic resilience, creates jobs, raises incomes and increases food security. The focus would be on smart land-based restoration initiatives would be particularly helpful for women and youth, who are often the last to receive help in times of crises. The world is also to enter the UN Decade of Ecosystem Restoration; we have a real chance to build back better from the COVID-19 pandemic.
On this Desertification and Drought Day, let all of us pledge and others to push hard to restore our lands. We all have a role to play, because we all have a stake in our planet’s future. The creation of a ‘culture of prevention’ can go a long way toward protecting dry lands when desertification is just beginning and even when it is ongoing. It requires a change in Governments’ and peoples’ attitudes. The various preventive approaches include integration of land and water management to protect soils from erosion, salinization, and other forms of degradation, protecting the vegetative cover of land through plantation, cover crops and other means, integrating the use of land for grazing and farming where conditions are favorable, allowing for a more efficient cycling of nutrients within the agricultural systems, using indigenous technical knowledge of different communities in conservation practices, capacity building of communities and looking for alternate land use systems like Agro forestry, protected cultivation, Agro-tourism and others.