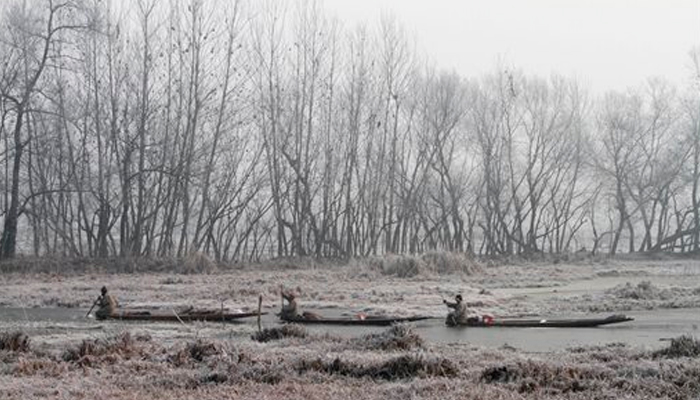 Vehicle plunges into Chenab at Ramban

JAMMU/ SRINAGAR, Nov 23: The cold wave has gripped the Union Territory of Jammu and Kashmir after rain and fresh snowfall while the traffic on Mughal Road and Jammu-Srinagar National Highway was suspended after heavy snowfall at Pir Ki Gali and Jawahar Tunnel area whereas, due to slippery road conditions a light motor vehicle plunged into river Chenab at Mehar near Ramban late this evening.

Click here to watch video
Official sources said that 86-km-long Mughal Road, connecting Shopian in South Kashmir with Rajouri and Poonch in Jammu region, was closed this morning after heavy snowfall and slippery road conditions. A large number of vehicles have been stranded at various locations due to closure of the highway.
“The traffic on main Jammu-Srinagar National Highway was suspended due to shooting stones and landslides at various places including Sallad, Panthyal, Champa Seri and Cafeteria Morh during the day today amidst rain. However, the highway was restored after some time by the BRO and private agencies maintaining it. However, in the evening, due to fresh snowfall at Jawahar Tunnel, the movement of passenger vehicles was stopped and late in the evening, the movement of other vehicles was also suspended,” the official sources said.
A Bolero vehicle reportedly fell into river Chenab at around 7.20 pm at Mehar, near Ramban. Two bike riders noticed the vehicle from some distance falling in the river and informed police at Ramban. It was raining in the area and the road was slippery. Moreover, due to new road widening work, there is no side drain along the highway. The vehicle was moving towards Kashmir side and 3-4 people were believed to be travelling in it, the sources said.
Immediately after the incident, the joint team of SDRF, Police and QRT launched search operation downside along the river with search lights. However, after the search operation of two hours, no success could be achieved to trace the vehicle or the passengers.
SSP Ramban, Haseeb-ur-Rehman said that rescue operation was launched immediately after receiving information by police and SDRF teams, besides locals. He said the flow of water is very fast at the site of the accident and people engaged in the operation were still clueless. He revealed that due to darkness no success could be achieved and the operation was suspended after two hours. It will be resumed in the morning again, he added.
With the fresh snowfall, there has been sharp fall in the temperature of Jammu today. The mountainous areas of Poonch, Rajouri, Doda and Kishtwar have received fresh snowfall while, rain continued in the entire region. The MeT office has predicted rain and more snowfall tomorrow and the day after.
Meanwhile, higher reaches of Kashmir experienced fresh snowfall while the plains were lashed by rains today leading to plummeting of temperatures across the region. The local Meteorological department here has predicted more snow and rains till Wednesday evening.
Higher reaches of the Valley including Gulmarg, Sonamarg, Sadna Top, Razdhan Pass, Peer Ki Gali and Jawahar Tunnel received fresh snowfall today.
A MeT official said that the present weather conditions would prevail across the Valley till Wednesday evening. He added that the weather would remain mostly cloudy on Tuesday while there is possibility of light rains and snowfall as well. He, however, said that the weather conditions would improve across the Valley from Wednesday evening. He said that there is no forecast of snowfall till December 2.
The higher reaches of Kashmir including Sonamarg received fresh snowfall. He said that due to the fresh snowfall at Sonamarg, Mani Marg, Drass and Zojila, the authorities have suspended traffic movement on the highway as a precautionary measure. Some vehicles are stranded in Sonamarg area after the road was closed.
The 434-km Srinagar-Leh highway was also closed for vehicular movement due to fresh snowfall at Zojila Pass.
Authorities this morning also closed 86 Km Bandipora-Gurez road following fresh snowfall across Gurez valley in North Kashmir’s Bandipora district.
An official said that the road was closed today morning after fresh snowfall across Gurez including Razdan Top. He said that keeping in view slippery conditions and fresh snowfall, the Bandipora-Gurez road has been closed as a precautionary measure.
An official said that some of the flights to and fro Srinagar Airport were cancelled today due to low visibility.
A MeT official said there is overall improvement in the minimum temperatures due to cloud cover. “The minimum temperature was 1.5 in Srinagar today against minus 3 yesterday. The minimum temperature was 0.3 and minus 4.5 respectively in Pahalgam and Gulmarg today.
Meanwhile, Ladakh’s Kargil district experienced fresh snowfall which has led to slippery road condition and traffic remained suspended particularly on NH 1D.
People were seen walking rather travelling in vehicles and on most of the roads children were seen Skiing and Sliding and enjoying the snowy season.
Kacho Mohammad Shabir Yabgo, while talking to media said that snowfall in November, December and January are good for a bumper summer as this snow remains longer in the form of Glaciers and help in the recharge of springs properly on which most of the Agriculture depends.
He further said that snowfall also led to miseries to the people due to closure of NH 1D as people remains cutoff from rest of the world for many months.
Metrology Department J&K and Ladakh have predicated snowfall on Nov 24 and 25.