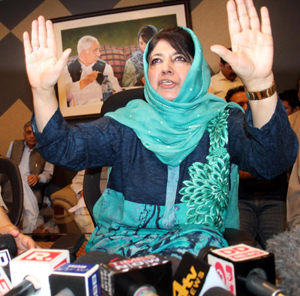 SRINAGAR, June 19 : Chief Minister Mehbooba Mufti today said that PDP never believes in power politics but working for the welfare of people.
She said after an hour-long meeting with her Ministers and party workers at her Gupkar residence in Srinagar: “I am not shocked as this alliance was never for power. PDP never believes in power politics and we worked for the people,”
“Our alliance with BJP was meticulously planned. We joined hands to solve the issues that Kashmir was facing,” she said. Click here to watch video
The Chief Minister said that pulling out from coalition by BJP did not shock her as the party’s coalition was not for power and had it been so “we would have joined hands with National Conference and Congress.”
Mehbooba said that Jammu and Kashmir is not an enemy territory as being perceived by few. “We had always said muscular security policy will not work in Jammu and Kashmir, reconciliation is key,” she said.
“One can’t treat Jammu and Kashmir as enemy territory-muscular policy can’t succeed here,” she said.
She began her press conference by raising Article 370, under which the State enjoys a special status, and said “we have safeguarded Article 370 and 35-A (of the Constitution) and we will continue to do that. We have been able to withdraw 11,000 cases against the stone pelters,” she said.
The Chief Minister said the Prime Minister visited Pakistan for talks but these could not move ahead. “Even ceasefire was not positively responded”, she said.
Mehbooba said the coalition was crafted with the largest party with a huge mandate only after assessing the requirements of the State. She said it was not liked by people but the ideas, for which it was made, were bigger. These included talks with Pakistan, ceasefire, reconciliation and confidence-building measures.
“We forged an alliance with the BJP with an aim to preserve the special status of the State, build an atmosphere of reconciliation. We didn’t forge an alliance for the lust of the power but it was for a bigger motive including unilateral ceasefire, PM’s visit to Pakistan and withdrawal of cases against 11,000 youth,” she said.
She said that the reconciliation is the only agenda of PDP and they tried their best to take the steps forward in this regard.
The Chief Minister said her Government retained the territorial integrity of the State and addressed the insecurity of the minority in a case of cow vigilantism and in Rassana.
“We tried to keep Jammu, Kashmir and Ladakh together. I am happy that we stood by we meant despite our workers facing tremendous hardship on the ground. We will continue with the process of dialogue and reconciliation,” Mehbooba said.
Without explaining anything about the Agenda of Alliance, she sounded confident that her party did address the agenda it had.
Mehbooba also said that she has submitted her resignation to Governor and PDP will not forge alliance with anyone. “We had formed the alliance with BJP because we shared a grand vision. It took us many months to form an alliance whose prime focus was reconciliation and dialogue. We have taken many measures to improve the situation in the State,” she said.
She also mentioned about the unilateral ceasefire during Ramadhan announced by Home Minister Rajnath Singh and Prime Minister Narendra Modi’s visit to Lahore in 2015. “The Ramadan ceasefire brought relief to the people but unfortunately the other side didn’t reciprocate”, she said.
Mehbooba said her party will continue to strive for dialogue and reconciliation in the State. “I have told the Governor we will not go into any other alliance,” she said.