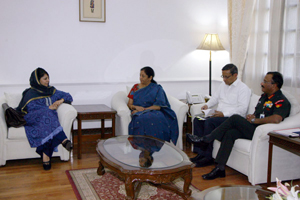 JAMMU, Apr 9: Chief Minister Mehbooba Mufti today met Prime Minister Narendra Modi and Defence Minister Nirmala Sitharaman and discussed with them security and political situation in Jammu and Kashmir including the borders with Pakistan. She sought engagements between Indo-Pak leadership as well as Armies to reduce tension on the borders, where people were suffering due to hostilities between the two nations.
Top officials of the Defence Ministry were present at the security review meeting between Sitharaman and Mehbooba while it was one-to-one between the Prime Minister and the Chief Minister. Both the meetings lasted about half an hour each.
Briefing Prime Minister on overall security situation in Jammu and Kashmir as well as reminding him on the implementation of ‘Agenda of Alliance’ (AoA) reached between PDP and BJP before formation of coalition Government in the State, Mehbooba called upon Modi to find ways and means to end cycle of violence in the State including addressing alienation among the youth.
She told the Prime Minister that people of Jammu and Kashmir have suffered immensely during the turmoil of past three decades and were looking up to the country’s political leadership to support them in getting out of this cycle of uncertainty and deaths.
Mehbooba while reiterating her oft-repeated demand for dialogue between India and Pakistan leadership, favoured that the Armies of two nations also stay in touch with each other to reduce tension on the borders.
“The Chief Minister sought more frequent meetings at the highest level between the two countries. She also favoured the idea that the two Army Commands (India and Pakistan) be in touch with each other to minimize the level of tensions across the border in the State, which has affected lakhs of people living in the forward villages,’’ an official spokesman said.
He said Mehbooba Mufti also favoured opening of more cross-LoC routes between India and Pakistan to facilitate people-to-people movement.
“The Chief Minister called for taking cross-LoC movement to next higher level by working on opening of more historic routes across the LoC and movement of more people to build public confidence in the peaceful engagements,’’ the spokesman said.
Presently two cross-LoC routes are operational in Jammu and Kashmir including Poonch-Rawlakote in Jammu region and Uri-Muzaffarabad in Kashmir region. Two other cross-LoC routes, which were opened along with Poonch and Uri routes, have since been closed down.
Mehbooba also called for opening Sharda Peeth, ancient seat of learning across LoC and developing it like Nalanda and Takshila. Only yesterday, she had assured a delegation of All Party Migrant Coordination Committee that she would take up the issue of opening Sharda Peth, with the Prime Minister.
According to sources, the Chief Minister gave detailed assessment of security situation in Jammu and Kashmir, both along the frontiers with Pakistan and hinterland, to the Prime Minister and steps being taken by the State Government to keep the situation under control by maintaining peace. However, she said, it was up to the Centre Government to keep the borders peaceful so that the people living in border areas don’t suffer.
On political and developmental fronts, the Chief Minister took up with the Prime Minister the implementation of Agenda of Alliance (AoA), Rs one lakh crore worth Prime Minister’s Development Package (PMDP) and other developmental projects going on in Jammu and Kashmir. She stressed the need to expedite work on the projects, which were being executed by the Central agencies.
The Prime Minister, as exclusively reported by the Excelsior, is scheduled to visit Jammu and Kashmir next month during which he would inaugurate number of developmental projects and also address a function at Agriculture University in Kashmir.
Meanwhile, Mehbooba also met Defence Minister Nirmala Sitharaman for half an hour this evening and had detailed discussion on security situation in the wake of operation being undertaken by the troops in the Kashmir.
“Situation prevailing on the Line of Control (LoC) was also discussed,’’ sources said.
Mehbooba reportedly took up some issues pertaining to vacation of land by the Army in Jammu and Kashmir, they added.
Army along with other security agencies including Jammu and Kashmir had undertaken one of the biggest anti-militancy operations in South Kashmir on April 1 and killed 13 militants at Shopian and Anantnag, majority of them locals. However, in the operation, three Army soldiers were also martyred while four civilians were killed.
Senior officers of Defence Ministry and Army were also present during Mehbooba’s meeting with Sitharaman.
During the meeting with Sitharaman, the Chief Minister underscored the need for adopting a humane approach while dealing with the situations and avoiding collateral damage during security operations. Every civilian killing or collateral damage, she added, puts the peaceful engagement efforts of the Government on the back burner and gives the vested elements an opportunity to exploit the situation to their advantage.
Both the Chief Minister and the Defence Minister agreed on sticking to a professional approach to deal with the situations to win back hearts and minds of people.
During the meeting, Mehbooba raised the issue of enhancement of rent on the properties, including orchards and buildings, under the use of Army in the State. She also sought expediting the process of handing over of balance portion of Tattoo Ground to local administration for developing tourist infrastructure.
Besides, Mehbooba sought handing over of 456 kanals of land from Army at Anantnag High Grounds and vacation of Kharbathang Plateau at Kargil in lieu of alternate pieces of land. She sought clearance of bottlenecks coming in the way of expansion of Jammu Airport and Jammu University.