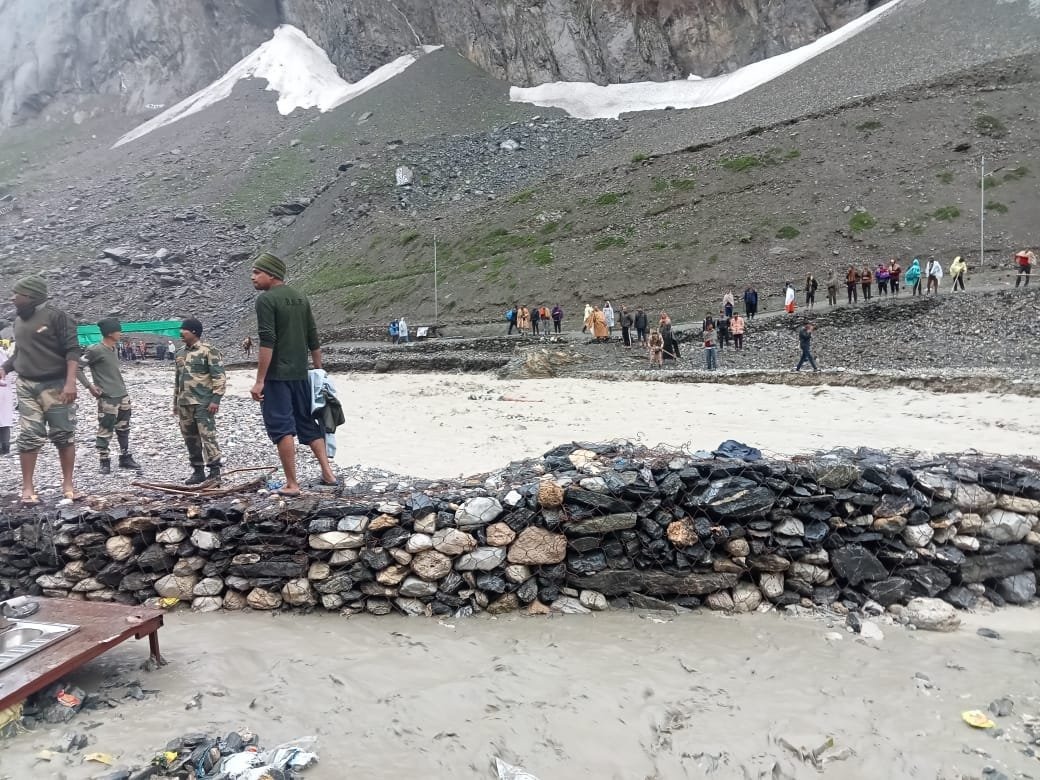 Srinagar, Jul 8:At least 15 persons were killed when a cloudburst near the holy cave shrine of Amarnath in south Kashmir Himalayas triggered flash floods Friday evening that also damaged 25 tents and three community kitchens, police officials said.
Three persons have been rescued, they said.
The cloudburst struck around 5.30 pm amid heavy rainfall, they said.
The gushing waters hit the base camp outside the shrine, damaging 25 tents and three community kitchens where the pilgrims are served food, they said.
15 persons were killed in the incident even as police, army and NDRF personnel launched a rescue operation, the officials said.
An NDRF team was already there while two more teams are being rushed, they added.
Prime Minister Narendra Modi expressed anguish over the incident.
“Anguished by the cloud burst near Shree Amarnath cave. Condolences to the bereaved families. Spoke to @manojsinha_ Ji and took stock of the situation. Rescue and relief operations are underway. All possible assistance is being provided to the affected.”
Union Home Minister Amit Shah directed central forces and Jammu and Kashmir administration to ensure swift rescue operations.
Shah said in a Tweet in Hindi that he has spoken to J&K LG Manoj Sinha to take stock of the situation.
“NDRF, CRPF, BSF and local administration are engaged in the rescue work. Saving people’s lives is our priority. I wish all the devotees well,” the minister said.
Sinha said he is closely monitoring the situation and instructed all concerned to provide necessary assistance to the pilgrims.
“Deeply pained by unfortunate incident of cloudburst at Shri Amarnathji holy cave, in which precious lives have been lost. I send my heartfelt condolences to bereaved families. Rescue operation by NDRF, SDRF, BSF, Army, JKP & Shrine board admin is in progress,” he tweeted.
Amarnath cloudburst: Union Minister Dr. Jitendra Singh confirms that he is “in constant touch with the UT administration. The SDRF and NDRF teams have promptly swung into action to provide all possible relief and assistance,” tweets Dr Jitendra Singh. (Agencies)