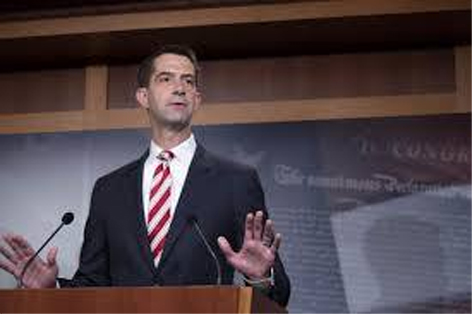 WASHINGTON, July 3: The ruling Communist Party of China is acting “aggressively” in its neighbourhood and it essentially “invaded” India, killing 20 of its soldiers, a top American Senator has said.
In the last several weeks, more than a dozen US lawmakers have spoken against the Chinese aggression against India and have come out in support of New Delhi.
“All across the periphery, the Chinese Communist Party (CCP) is acting aggressively. It’s essentially invaded India and killed 20 Indian soldiers,” Senator Tom Cotton said on the Senate floor on Thursday.
In the South China Sea, it has attacked or otherwise threatened developments from Vietnam, Malaysia and the Philippines. It has increasingly encroached on Taiwanese and Japanese airspace, the Republican Senator said.
China claims nearly all of the South China Sea, though Taiwan, the Philippines, Brunei, Malaysia and Vietnam all claim parts of it.
In Hong Kong, the newly-imposed security law proves most clearly that the Chinese Communist Party will not abide by its commitments whether to its own people or to foreign nations, Cotton said.
“There was actions this week (wherein) Beijing effectively torn up the joint declaration it made with Britain to govern the peaceful handover of Hong Kong as cynically as China has broken its commitment to the United States, to the World Health Organisation, the World Trade Organisation and others,” said the top American Senator.
Senator Mitch McConnell, during his speech on the Senate Floor, in support of National Defence Authorisation Act (NDAA) 2021 alleged that China is engaged in international provocation.
An amendment to NDAA 2021 moved by Senator Cory Gardner this week supports India against the Chinese aggression in the Galwan Valley in eastern Ladakh and says that the two countries should work toward de-escalating the situation along the Line of Actual Control (LAC).
The expansion and aggression of the People’s Republic of China in and around disputed territories, such as the LAC, the South China Sea, the Senkaku Islands, is of significant concern, says the amendment.
International provocation of China has only stepped up “during this pandemic – which they helped worsen – against Taiwan, against India, against the Philippines, and so on,” McConnell said on Wednesday.
Meanwhile, Indian-American Congressman Raja Krishnamoorthi in a statement on Thursday said that the aggression must be met with clear American resolve to stand by India and its other allies in the region.
“We must work to de-escalate these tensions, while sending a clear message to China that their belligerence will not be tolerated,” Krishnamoorthi said.
“India is one of our closest friends, and it is vital that we stand with India in the face of the Chinese government’s border aggression,” he said.
“The Chinese government is taking advantage of the COVID-19 pandemic to throw elbows at its neighbours in what’s becoming a growing pattern of aggression,” he added.
The Indian and Chinese armies are locked in a bitter standoff in multiple locations in eastern Ladakh for the last several weeks, and the tension escalated manifold after 20 Indian soldiers were killed in a violent clash in the Galwan Valley on June 15.
The two sides are holding diplomatic and military-level talks to ease the situation along the LAC. (PTI)