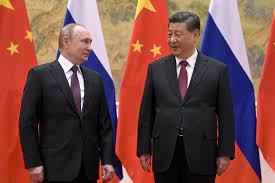 Beijing, June 3: The Chinese Government is trying to help Russia financially without violating Western sanctions, Washington Post reported, citing sources.
Moscow pressured Beijing at least twice to offer new forms of economic support, the newspaper said, citing sources. According to them, Russia’s demands on China include maintaining trade commitments made prior to the start of Russia’s military operation in Ukraine on February 24, as well as financial and technological support now sanctioned by the United States and other countries.
Russia did not request weapons and ammunition from China, the sources added but declined to specify whether other items that could be used in military operations including technology and supplies were requested.
China is in a difficult position, the newspaper noted, adding that Chinese President Xi Jinping asked his closest advisers to figure out how to help Russia financially without violating sanctions.
On February 24, Russia launched a military operation in Ukraine after the breakaway republics of Donetsk and Luhansk appealed for help in defending themselves against Ukrainian forces. In response, Western countries and their allies have rolled out a comprehensive sanctions campaign against Moscow.
The European Union has already introduced five packages of sanctions and has agreed on the sixth.