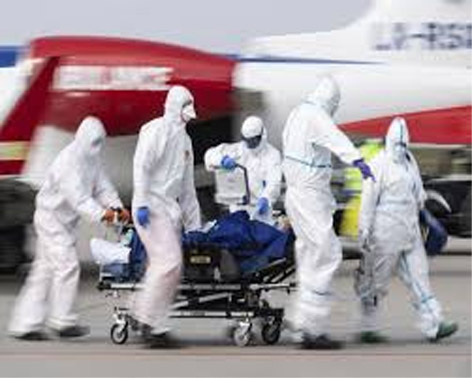 BEIJING, Apr 5:China has reported 30 new cases of the novel coronavirus, including five locally transmitted infections, even as nine of the 13 administrative districts of virus-hit Wuhan city were declared ‘low-risk areas’ signifying a gradual return to normalcy, officials said on Sunday.
China’s National Health Commission (NHC) in its daily report said other than the 30 new confirmed COVID-19 cases reported in the mainland on Saturday, 47 new asymptomatic cases were also reported.
The NHC said 1,024 asymptomatic cases were still under medical observation, including 244 from abroad.
Asymptomatic coronavirus cases are those who test positive for the virus but do not show any symptom and have the potential to cause sporadic infection clusters.
Three deaths were also reported on Saturday — all from virus epicentre Hubei Province — taking the coronavirus death toll in China to 3,329 people.
The overall confirmed cases in the mainland reached 81,669 on Saturday, including 1,376 patients undergoing treatment and 76,964 others discharged from hospitals after recovery.
With another administrative district being classified as ‘low risk’ for the infection, there are nine district in total in Wuhan marked as ‘low risk’.
The other four districts of Wuhan are classified as medium-risk, state run Xinhua news agency reported.
On March 27, Wuhan’s coronavirus risk evaluation was downgraded from ‘high risk’ to ‘medium risk’. Now, Hubei Province has no cities or counties marked as ‘high risk’.
Hubei province, which has a population of 56 million, was put under lockdown on January 23. Officials say the province is gradually being opened up as the virus has abated with fewer new infection cases in recent weeks.
According to the risk criteria defined by the Chinese government, counties and districts with no newly confirmed cases in the last 14 days are categorised as ‘low-risk’ areas, those with fewer than 50 cases or those with over 50 but without a concentrated outbreak are classified as ‘mid-risk’ areas, and those with over 50 cases as well as a concentrated outbreak are classified as ‘high-risk’ areas.
Signifying the slowdown of the virus in the country, China on Saturday held a nationwide memorial for martyrs and victims of the coronavirus in the country.
Chinese President Xi Jinping led the national mourning from Beijing. Three minutes’ silence was observed all over the country and flags flew half-mast. (PTI)