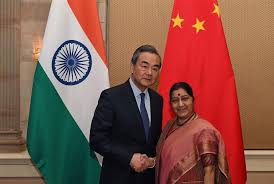 PRETORIA: China and India have extensive common interests and they have far more consensus than differences, Chinese Foreign Minister Wang Yi told his Indian counterpart Sushma Swaraj as they met here on the sidelines of the BRICS Ministerial Conference.

During their meeting, the two leaders discussed ways to maintain the momentum in bilateral and multilateral cooperation. The meeting took place more than a month after an informal summit between Prime Minister Narendra Modi and Chinese President Xi Jinping in Wuhan.

China and India have extensive common interests, and they have far more consensus than differences, Wang was quoted as saying by state-run Chinese news agency Xinhua.

China and India working together will accelerate the common development of the two countries, benefit the entire world, and contribute to the progress of human civilisation, Wang, who is also the Chinese State Councilor, said.  (AGENCIES)