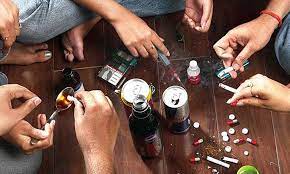 There is no scope for any ambiguity, absolutely not, that whatever methods are required to contain and check drug menace and whichever latest mechanism is evolved in this respect, nothing should be left to any chance but implemented aggressively . Any problem should be seen not only in its limited perspective but what are the levels of perils and challenges posed by it so that evolved mechanism and strategies did not remain only on papers. We should be alarmed at all levels both in the UT Administration as well as in the society about how the entire structure of drug menace is getting deep drenched both in societies and in mopping financial avenues from sale proceeds to funding terrorism, acquiring of arms by anti national elements, smugglers for upping their nefarious trade and for money laundering besides aiming at breaking the strength, rather incapacitating our most productive young Human Resources.
Unfortunately , worst over it is the scourge getting expanded exponentially and its use getting widespread day by day in Jammu and Kashmir. Now, a “Drug Region” of entire Punjab – Jammu and Kashmir like entity stands established due to extremely ”well” organised drug structure and thus a transit route to effect maximum turnover in drugs trade is through this ”region” . What is being stressed is , again, the dire need of taking on drugs trade very effectively and sternly. It is a good step, therefore, that the Union Ministry of Home Affairs evolved a mechanism by forming Narco Coordination Centre (NCORD) so as to evolve better coordination between different agencies required to deal with the Drug traffickers as this very coordination and a “togetherness” like a solid entity is not only required much but is expected to show extremely encouraging results. It is, therefore, incumbent upon the agencies to frequently meet, deliberate upon and devise ways of how best could the existing Drug Laws enforced.
In this connection, since each and every state / UT is required to follow suit and establish NCORD centres and form UT level NCORD committees almost in every district, an appraisal of the performance of the UT of Jammu and Kashmir paints an unsatisfactory and increasingly less encouraging picture. While looking to the widespread use of drugs and its trafficking in Jammu and Kashmir assuming challenging proportions, the UT should have projected itself as a model UT in breaking the backbone of Drugs mafia and Drug “lords”. While NCORD mechanism was evolved in the year 2016, a step further of restructuring it into four tiers up to district level was done in the year 2019. The mechanism calls for convening monthly meetings at district levels headed by the District Magistrate to assess developments and progress of every hue while quarterly meetings are mandated to be held at (higher) UT levels. It is disheartening that since November 2021 , there has been no meeting convened at SLC levels while unbelievably at many districts, the NCORD committees are yet to be constituted.
In other words, it denotes that still the gravity of the situation in respect of the most horrifying perilous effect of drugs menace is not assessed. It also means that there is no effort to have data up dated in respect of the entire gamut of the problem including number of users, density of users district wise as also unfortunately latest data about addicts, let alone arrangements made to rehabilitate them. We have been regularly voicing our concern over this growing challenge to human well being and socio-economic security of young people falling in the trap and therefore stressing upon increased coordination between different agencies so that seizures, arrests and maximum deterrent convictions take place.
We, however, do not write off all that is being done by the UT Administration in this regard but the challenge of drug menace is increasingly clamouring for doing more and to adopt mechanisms like NCORD for better handling of and coordination between various agencies of the government to save more and more people from this slow poison , their families , the society and the country as a whole . Police and its different concerned wings, Health Department, Social Welfare Department and Home Department , in particular, together can do it and with superb results on the ground in Jammu and Kashmir.
Appointment on
compassionate grounds
Since the Union Home Ministry has recently brought into the process of implementation of modified guidelines in respect of appointment on compassionate grounds of the closest family member of a deceased employee who passed away during his /her service , we expect the same shall govern the procedure currently in vogue in the UT of Jammu and Kashmir and also remove doubts all about the SRO 43 in this respect. Whatever amends or relaxations as also modified procedures are introduced for this purpose, the implementation process should be to eliminate delays , not more than six months in any case, and thus afford to succour the affected families especially in cases with special emphasis related to and as a result of terrorist violence in Jammu and Kashmir. Modified policy of MHA for compassionate appointment of next of kin of a deceased employee who dies in harness , therefore, must pave way for more transparency and objectivity in such cases which at the moment are pending for disposal in the UT.