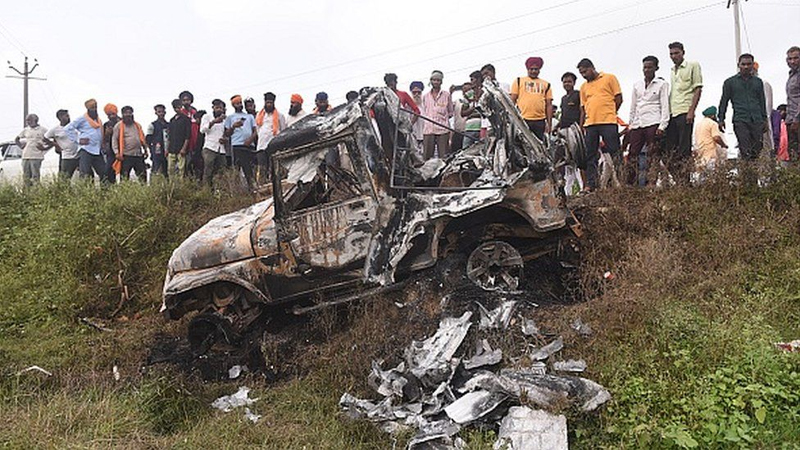 LAKHIMPUR KHERI (UP), Dec 6: A court here on Tuesday framed charges against Union minister Ajay Kumar Mishra’s son Ashish and 12 others for murder, criminal conspiracy and related offences in the case of mowing down of protesting farmers in October 2021 in Lakhimpur Kheri, paving the way for the start of the trial.
Additional District Judge Sunil Kumar Verma has now fixed the next hearing on December 16, District Government Counsel (Criminal) Arvind Tripathi told PTI.
Tripathi said that 13 accused, including Ashish Mishra, have been charged under IPC sections 147 and 148 related to rioting, 149 (unlawful assembly), 302 (murder), 307 (attempt to murder), 326 (voluntarily causing grievous hurt by dangerous weapons or means), 427 (mischief) and 120B (punishment for criminal conspiracy), and section 177 of Motor Vehicle Act.
Ashish Mishra, son of Union Minister of State for Home Ajay Kumar Mishra, is the main accused in the case.
The other 12 accused are Ankit Das, Nandan Singh Bisht, Latif Kale, Satyam alias Satya Prakash Tripathi, Shekhar Bharti, Sumit Jaiswal, Ashish Pandey, Lavkush Rana, Shishu Pal, Ullas Kumar alias Mohit Trivedi, Rinku Rana and Dharmendra Banjara. All of them are in jail.
The 14th accused, Virendra Shukla, who is out on bail, has been charged under section 201 of IPC which is related to causing the disappearance of evidence of an offence or giving false information to screen the offender.
The primary object of framing of charge is to tell the accused person precisely about what the prosecution intends to prove against him.
Charges under various sections of the Arms Act were also framed against Ashish Mishra, Ankit Das, Nandan Singh Bisht, Satyam alias Satya Prakash Tripathi, Latif Kale and Sumit Jaiswal, Tripathi said.
On October 3, 2021, eight people were killed in Tikunia in Lakhimpur Kheri during violence that erupted when farmers were protesting against Uttar Pradesh Deputy Chief Minister Keshav Prasad Maurya’s visit to the area. (PTI)
Four farmers were mowed down by an SUV, in which Ashish Mishra was seated, according to the Uttar Pradesh Police FIR.
Following the incident, the driver and two BJP workers were allegedly lynched by angry farmers. A journalist also died in the violence.
The 14 accused will be tried in the case related to the death of four farmers and the journalist. (PTI)