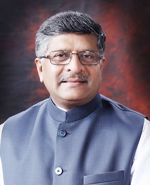 NEW DELHI: Law Minister Ravi Shankar Prasad on Wednesday said the government intends to make India a hub of domestic and international arbitration by bringing in changes in law for faster resolution of commercial disputes .

Prasad was speaking after moving the Arbitration and Conciliation (Amendment) Bill Act, 2019 that seeks to make changes in the existing law of 1996. The minister said the amendment bill has been prepared on the basis of recommendations of a high-powered committee, which held consultations with all stakeholders.

This Bill was cleared by Lok Sabha in August 2018 but could not be passed by Rajya Sabha. The bill lapsed following the dissolution of the 16th Lok Sabha. The minister also moved the New Delhi International Arbitration Centre Bill, 2019. Initiating the debate on the two Bills together, Prasad said the changes in law are for establishing Arbitration   Council of India headed by retired judges.

The minister said after the amendments are approved, one can straight away go for arbitration and there would be no need to go to courts for initiating the process. Prasad said a provision has been made for timeframe. Six months would be for claim and defence from the date the arbitrator receives the notice of appointment. Arbitration must be completed in 12 months.

“The two legislations are order of the day to take India forward,” the minister said.

The amendment bill will facilitate in achieving the goal of improving, institutional arbitration by establishing an independent body to lay down standards, make arbitrationprocess more friendly and cost-effective, and ensure timely disposal of cases.

It provides for setting up of an independent body — Arbitration Council of India (ACI) — to frame arbitral institution and accredit arbitrators by laying down norms. The ACI would be mandated to frame rules on how institutions would be graded, norms to be followed, monitoring of quality and performance, and would also encourage training of arbitrators. (agencies)