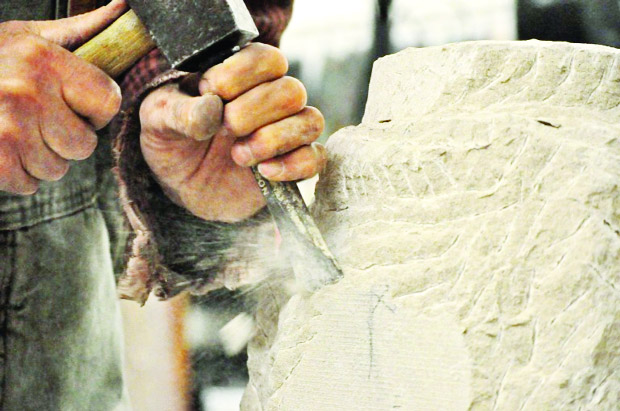 Lalit Gupta
After a refreshing two-night stay in the alpine environs of Sanasar we headed back to Jammu on Saturday. On the suggestion of our driver we bypassed the overflowing hill station of Patnitop and continued on the highway and took the small road that leads from Kasal morh to Bava Guha Naga Temple at Karlah village.
After parking the car and walking down a rather wide but steep ramp-like foot path we arrived at the picturesque Naga temple complex that nestles under a cluster of deodar trees. We sat down outside the shrine on one of the concrete benches to take out our shoes. At the sight of a prominently displayed notice board; ‘no leather object inside the temple complex’, I stayed back to take care of ladies’ hand bags and parked myself on the bench.
To distract my mind from the cacophony of excited tourists; men, women and children-mostly from north, central and western Indian states, I strolled my glance over the surroundings. My attention was drawn to the near-complete new Naga stone temple that stood at a hugging distance from the original Naga shrine in the woods.
In the din of customer-soliciting sales-boys of the surrounding shops selling handicraft and handloom, the staccato of load-ponies’ hoofs striking stone steps, ear-splitting drone of the cement-mixer generator, I noticed a middle age Dogra man, who dressed in a light grey kurta with a self-design and pajama, a jhola slung on shoulders was about to descend the stairs leading to the trail to Sudhmahadev.
On the eye contact, I nodded to him. He broke into a smile, came and stood beside me and put down his jhola on the bench. Can’t exactly remember the opening thread of our conversation but soon I learnt that he was the in-charge mason of the nearby under construction stone temple. When I asked him whether he was a ‘bateda’ (the surname for traditional stone cutters of Jammu), he affirmed it with a smile. I invited him to sit by me. I was excited at my first close encounter with a traditional stone mason. Though, I had observed the members of his profession cutting and shaping stones during my visits and documentary shooting sessions at the archaeological monuments at Ramnagar, Billawar and Krimachi. But, I never had the occasion to talk with any one of them.
The stone mason Khem Raj’s happy eyes, infectious smile, and friendly manner created an immediate bond and I showered him with a lot of questions. He was surprised by my enquiries about the various technical terms in Dogri used by ‘batedas’ to communicate with each other the umpteen details of the architectural structures, designs and materials.
Our conversation was interrupted by my wife and daughter who had come back after having the ‘darshana’. They exchanged amused looks to discover that as usual I had struck a conversation with an unknown passerby. After the exchange of introductions with my family members Khem Raj invited me to have a closer look at the stone temple. We entered from the small back entrance that allowed a separate ingress for men and the materials to the temple under construction.
Once inside the enclosure Khem Raj started naming technical names in Dogri for arches, key stone, pillars, capitals, base, shikhara et al. He was especially excited to explain about his personal contribution in selecting the structural and visual elements from the adjacent original wooden temple, and then successfully transferring them into the medium of stone. With a humility laced triumph and authentic pride, he pointed out the pillared pradakhshina path marked with arches, the well thought out dimensions of the ‘garbha griha’, its door way and decorative design, various forms of snakes carved on stone temple walls and pillars, small shikharas on the four corners of the main shikhara and other details. In that moment, he stood tall as one of the few sentinels of the age-old knowledge system and craft of Bhartiya Vastu and Shilpa Shastras in Duggar.
With a spritely amble, he led me to the nearby shed where big and small blocks of Kashmiri granite were lying in various stages of carving, cutting and grinding. We kept talking about how cutters and grinders have made the work of stone cutters easy. He said nowadays a few appreciate the craft. The people are only after ready-to-use materials like ceramic tiles etc. and have lost appreciation for the permanent material such as stone; which of course demands skill and time. He also let me know that it will take at least six more months to complete the temple.
While coming out of temple complex, I told him about the the master sculptor Natthu Bateda who some 150 years ago had carved stone reliefs of PapNashani Baoli at Sudhmahadev and the sculpture of ‘Nandi’ that sits majestically on a pedestal in front of the Shiva Temple at Ramkot.
Khem Raj’s eyes lit up. He stopped for a moment and looked back at the temple as if silently admiring the magnum opus of his life. The next moment his face wore a blank look: None of his sons were interested in their ancestral craft!
With a promise to meet again very soon I bid goodbye to Khem Raj; one of the last traditional master mason of Duggar. We reached back by evening and immersed ourselves in Jammu’s sweltering heat and its modern day urban setting bereft of any notable character.