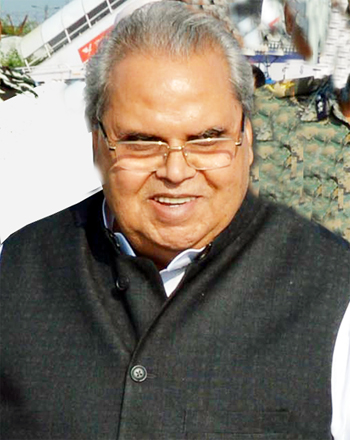 Sanjeev Pargal
JAMMU, Aug 22: Newly appointed Jammu and Kashmir Governor Satya Pal Malik has admitted that it is a challenging job ahead for him in the sensitive militancy-infested border State but declared that he would try to win confidence of the people and address the issue of regional imbalances.
Malik, who was yesterday appointed as first political Governor of Jammu and Kashmir by the Central Government, where earlier only retired civil servants, Army and Intelligence officers were appointed as the Governors, said with his appointment; the Centre has underlined the primacy of people’s concerns.
Admitting that the task (of Jammu and Kashmir Governor) is challenging, Malik, who reached Srinagar this afternoon and will take oath as the new Governor at 11 am tomorrow, told a national newspaper that the appointment of a political person as a Governor was a signal that the Centre was underlining the primacy of people’s concerns.
The basic challenge, according to Malik, has been to win confidence of the people of the State.
Significantly, Malik also mentioned about regional imbalances in Jammu and Kashmir, which has been core issue of the Bharatiya Janata Party (BJP) and was mentioned as one of the reasons by BJP national president Amit Shah for withdrawal of support to Mehbooba Mufti-led Government in June this year, which led to imposition of Governor’s rule in the State on June 20.
“Winning confidence of the people of Jammu and Kashmir and addressing the issues concerning regional imbalances is my top priority,” Malik, who had worked closely with VP Singh, Charan Singh and Mufti Mohammad Sayeed besides top BJP leaders, told the newspaper.
Asked by the newspapers on Centre’s message in appointment of first political Governor in Jammu and Kashmir, Malik said: “the signal is that the Governor should be of the people”.
“Prime Minister (Narendra Modi) has always been serious about Jammu and Kashmir especially about development of the State and removal of regional imbalances across three regions (Jammu, Kashmir and Ladakh). The Prime Minister has always been with them (the people of Jammu and Kashmir) in crisis. During floods, he supported Kashmir like anything,” Malik said.
“My mandate is to meet people’s expectations and to address the imbalance among the regions,” Malik said adding that he would get an update on the issues soon after he takes over.
Recalling his association with former Jammu & Kashmir Chief Minister late Mufti Mohammed Sayeed with whom he had worked in the VP Singh Government, the newly appointed Governor said: “Mufti Saheb was a friend. I have worked with him. He was a wonderful person”.
Malik had resigned from Congress along with VP Singh, Arun Nehru, Arif Mohammad Khan and Mufti Mohammad Sayeed during Rajiv Gandhi Government. He became part of VP Singh’s Janata Dal and was the Union Minister in his Government.
Malik, currently serving as Governor of Bihar, was transferred to Jammu and Kashmir on Tuesday during a reshuffle of Governors by President Ram Nath Kovind along with the appointment of three new Governors for the States of Bihar, Haryana and Uttarakhand. The announcement marked the retirement of incumbents N N Vohra (Jammu & Kashmir) and K K Paul (Uttarakhand).
Meanwhile, Malik reached Srinagar this afternoon from Bihar. He will take oath as new Governor of the State at 11 am tomorrow.
Malik, who will be taking over the reins tomorrow, is a career politician who started as a student leader in Meerut University and became an MLA of Charan Singh’s Bhartiya Kranti Dal from Baghpat, in Uttar Pradesh, in 1974.
He had joined the Congress in 1984, and became a Rajya Sabha MP, but resigned three years later against the backdrop of the Bofors scam. He switched to the V P Singh-led Janta Dal in 1988 and became an MP from Aligarh in 1989.
In 2004, Malik joined the BJP and unsuccessfully contested the Lok Sabha elections, losing to former Prime Minister Charan Singh’s son Ajit Singh.
Before taking oath as Bihar Governor on October 4, 2017, he was in-charge of the BJP’s Kisan Morcha.
Meanwhile, outgoing Governor N N Vohra, who was at the helm of affairs for the last 10 years, today called on Prime Minister Narendra Modi on a courtesy visit.
He also met Union Home Minister Rajnath Singh.