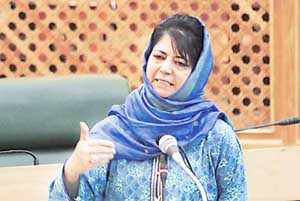 SRINAGAR: The Centre should consider a unilateral ceasefire in Jammu and Kashmir starting from Ramzan in mid May till the completion of the Amarnath yatra in August, Chief Minister Mehbooba Mufti said here today.

She made the remarks after chairing a four-hour all-party meeting, which was convened to discuss the present situation in the Kashmir Valley especially after a tourist from Chennai died due to stone pelting on May 7.

Mufti appealed to all shades of opinion in joining in the mission to get the State out of violence and bloodshed.

Talking to reporters after the meeting, she said, “Everyone (all parties) agreed that we should appeal to the Centre to consider a ceasefire like the unilateral ceasefire in (former PM Atal Bihari) Vajpayee’s time in Ramzan (later this month) till Amarnath yatra and Eid.” (AGENCIES)