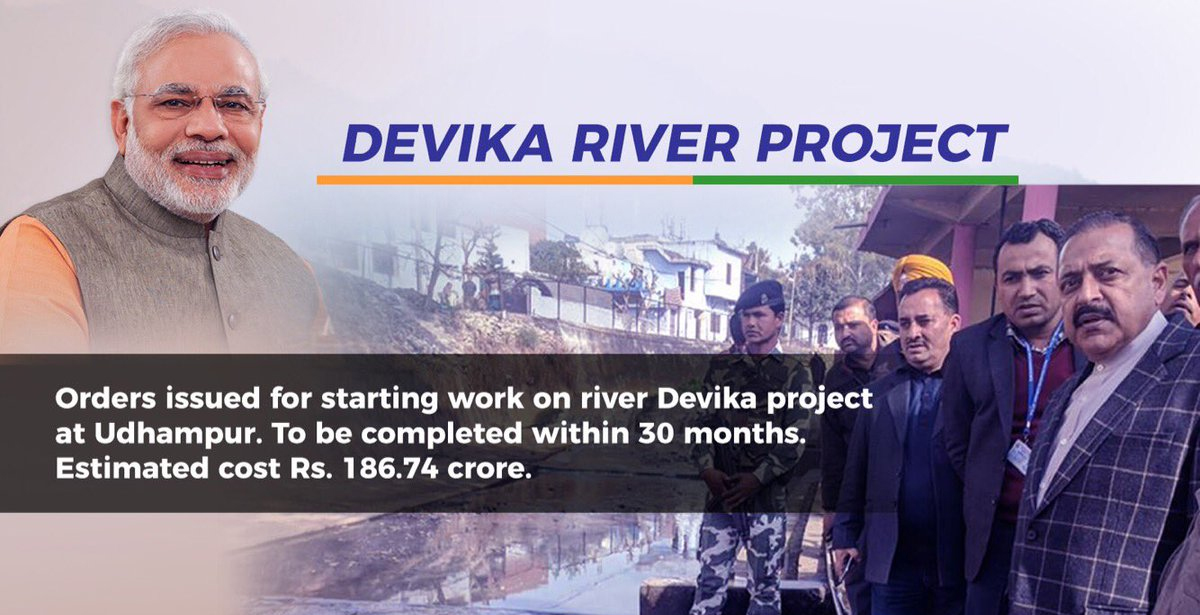 Excelsior Correspondent
NEW DELHI/Jammu, Sept 28: In a historic decision today, the Union Ministry of Environment, Forest & Climate Change, after due consultations with the Central Water Commission and the State Government of Jammu & Kashmir, passed written orders of sanction for the work on river Devika project at Udhampur under National River Conservation Plan (NRCP), at an estimated cost of Rs 186.74 crore.
As per the sanction order issued today, a time-limit of 30 months has been fixed for the completion of the scheme, which, in other words, means that the project has to be completed before 31st March 2021.
The decision of the Union Government was immediately conveyed to Union Minister Dr Jitendra Singh, who also happens to be the Member of Lok Sabha from Udhampur, and who had been following up this project on day to day basis for the last three years.
Soon after receiving the sanction order, Dr Jitendra Singh was overwhelmed and expressed his instant delight saying, “it is a lifetime dream coming true”. He said, he had,like many others of his generation, for several decades nursed a lifelong ambition to realise this project but somehow the earlier Governments never gave it a priority. Soon after becoming an MP, he said , he undertook it as a campaign and thanked the Modi Govt for having honoured our wish and our faith.
Dr Jitendra Singh said, river Devika is a matter of faith for the people of entire region and is considered to be the elder sister of river Ganga. To that extent, he said, this project is our humble offering to the preservation of our sacred heritage, in addition to serving the cause of environment . As per the scheme, he said, there will be rejuvenation and renovation of river Devika and its banks, and at the same time also the reconstruction of the Cremation Ghats.
Pertinent to mention that the in-principle approval of this project had been obtained in February 2017, when a budget of Rs.170.50 crore was earmarked. However, since it was a national level project and unique of its kind, it had to go through different stages of scrutiny and finally, the DPR had also to be approved after appraisal by IIT Roorkee.
As per the sanction order issued today, a time-limit of 30 months has been fixed for the completion of the scheme, which in other words means that the project has to be completed before 31st March 2021.
According to the official order, the project cost is to be shared in 90:10 basis between Governments of India and Jammu and Kashmir.
“The share of Government of India in the project would be Rs 168.66 crore and that of Jammu and Kashmir Government Rs 18.08 crore,” the order said.
The Government of India has fixed March 31, 2021 deadline for completion of the project i.e. within about 30 months from now onwards.
The order said any cost escalation, over and above the sanctioned cost, for whatsoever reasons, will be responsibility of the Urban Environmental Engineering Department (UEED)/State Government of Jammu and Kashmir. The Government of India share will be limited to Rs 168.66 crore.
“Progress of implementation of the project will be closely monitored by the Government of J&K/UEED to ensure that it was completed within the stipulate time. A comprehensive implementation schedule of the project will be prepared by the State Government and submitted to Ministry of Environment, Forests and Climate Change urgently. All efforts would also be made to complete the project within scheduled period of 30 months,” the order said.
It said the State Government should ensure that funds released by the Government of India for the project are immediately released to the UEED to avoid delays in project implementation.
The State Government has been asked to ensure appointment of agency for third party inspection of the project.
“The State Government will also assess socio-economic impact of the project at different stages i.e. pre-execution, during execution and post execution. In this regard, a study to be carried out through independent institution/consultant and cost involving for the study shall be borne out of centage charges provided under the project,” the order said.